The Legend of Batman - Born to Kill - Review 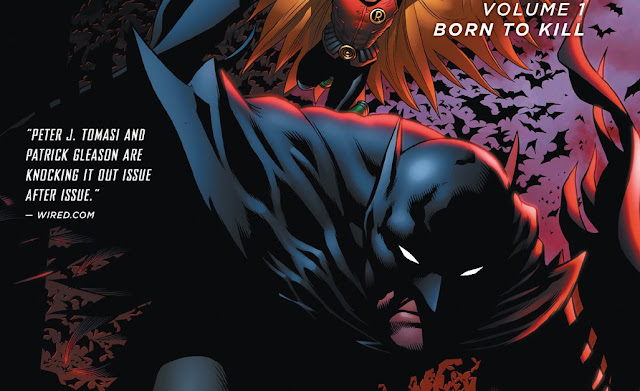 The pairing of Peter J. Tomasi and Patrick Gleason as a writer and artist respectively made for one the powerhouses of DC Comics. The pair made Green Lantern Corps one of the not to miss comics from Detective Comics and their New 52 Batman and Robin was sure to succeed. The result is a arc called Born to Kill which is very readable, action packed, emotional and everything one would hope from a Batman comic.

For long term fans of Batman though, the story might have been a bit repetitive with Tomasi perfectly imagining how Bruce and his son, Damien might interact. The only problem it is exactly the way the pair had been interacting up to that point. Consequently, when the pair try begin to interact rather than spar, the dialogue feels a little unbelievable. The emotion that Tomasi injects into things is moving, but not really earned from their interactions in other series'.

Over the course of eight-issues, Tomasi pairs Batman and Robin with a new villain NoBody, the disgruntled son of Bruce's mentor, Henri Ducard, as well as Bruce and Damien's father/son struggles. And the use of Henri Ducard is a good move on Tomasi's part, not only because he is a popular figure from the days of Batman and Tim Drake but because he had also appeared recently in the Dark Knight movie trilogy. NoBody begins the story as an everyday villain but quickly becomes something more when it is revealed that Bruce and Morgan Ducard know each other. Morgan even knows Batman's identity.

Over in the Batman Incorporated series, it is shown that Batman is on the side of good against Talia Al-Ghul but here, Tomasi heavily implies that things aren't quite as clear cut as that. Batman tries to keep Robin from the harm of NoBody because NoBody represents a murderous period in Bruce's life, a time when Bruce is exactly what he doesn't want Damien to turn into.

The power behind Tomasi's and Gleason's Green Lantern Corps was always in its plot twists, strong emotion and at times, graphic-ish content. The emotion behind Born to Kill is more than enough to make up for its predictability and the graphic content is excellent, there is one moment when Damien pulls a bat out of thin air and crushes it to death and Batman and NoBody beating each other to bloody pulps at the end. This is far from something to gross someone out, instead Tomasi uses the violence to progress the emotion of the story and Gleason's slightly cartoonish art makes it shocking but not repulsive.

Tomasi twists the plot when it is revealed that Bruce is keeping things from Damien, which pushes his son to join NoBody. Secretive Bruce was a characteristic that was done away with in the early 2000s but had come back in the Court of Owls storyline but it was a trope that was overused back then and still is now. As smart as Bruce is, his secrets always push a wedge between him and his Robins, you would have thought they would have learnt by now! Bruce seriously shuts Damien out and it hard to sympathise with him when he has to go rescue Damien.

Furthermore, the father/son relationship doesn't feel right when you consider that Bruce and Damien haven't really met before. Bruce caught a fleeting glimpse of his son before the end of Final Crisis and then they had one adventure together before he left his son in the care of Dick Grayson. I can buy that Bruce would care for Damien's well being but lines like Bruce shouting, "You tried to murder my son and then expected to live?", don't really feel earned. Why now does Bruce want to have so much to do with Damien's life when he didn't before hand.

For a new reader, no doubt Tomasi sells all of this, Bruce feels Damien is his ultimate responsibility and he has to keep him away from Talia's influence. And if one came to the New 52 reboot with no knowledge of the DC universe beforehand, then the opening two-page spread would give them all the info they would need to understand what was going on. But for older readers, Bruce's concerns really have no basis, the reader doesn't know why Bruce took Damien into his care or why he replaced Dick Grayson as Robin.

Born to Kill comes to its end almost too conclusively, Bruce and Damien come to such a father/son understanding that it is hard to understand where the drama will come from in the future. But Born to Kill interested me enough to keep delving into the world of Batman and I'm interested to see where things go from here...