Vampire Diaries: Season 8 Episode 3: You Decided That I Was Worth Saving - Review 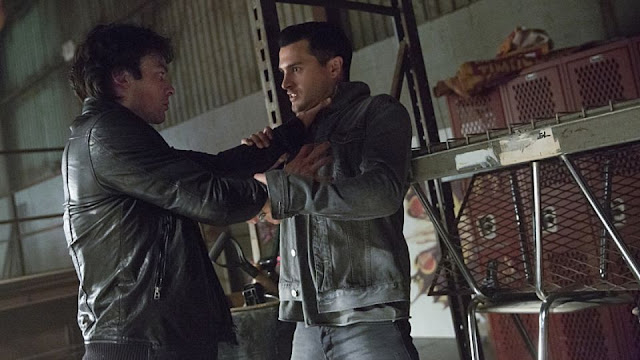 I'm afraid to say it but this episode didn't make an impression on me. Almost as soon as I had finished it, I had virtually forgotten what had just happened! Either Vampire Diaries is spinning its wheels or its run out of plot. But at this point, is there really a difference?

If this episode was watched solely by Caroline and Stefan worshippers then it would have been fine, there is certainly plenty of fodder for them here. Caroline is really excited for her wedding and Bonnie has decided to abandon Damon in a last ditch attempt to rescue Enzo. There is a part of me which feels sorry for Caroline as whenever anyone is happy in this show, something happens to ruin it. But I really feel sorry for Bonnie as she has spent her entire time on this show in some sort of never-ending sorrow. When was the last time she has been happy for more than a couple of episodes?

Unfortunately, the big "battle" between Damon and Enzo was anything but a fight, coming across more comical than deadly. Neither of the characters could actually die as they are too wrapped up in the main plot for that to happen, so it rendered the whole thing useless. The best part of it was when Stefan and Caroline got their necks snapped. (Never turn your back on an angry vampire, guys!) Have none of these characters learnt anything over the last eight seasons.

I guess Bonnie has. She brings up the same point that Sybil does at one point, asking whether Damon, someone who has committed atrocious act after atrocious act, deserves life over someone else, more innocent. There have been many characters who have brought up this point so far in this season and we are only three episodes in! I wonder if this is just a line for the script or a specific plot point which will be brought up at some point. Given how many times Hell has been mentioned, will it be Damon finally going there? I guess we will just have to wait and see, all I know is that he is starting to get on my nerves.

Oh and Damon can add one more sin to the long list of sins he has accumulated, he murders Tyler Lockwood. This was perhaps the moment that I stopped trying to take this episode seriously. Tyler's death comes out of nowhere and it is supposed to be the moment that Damon is beyond redemption. Tyler tells us why his death is important rather than the script allowing the audience to discover that for themselves. But is his death really important, I mean, I'm fairly certain, Stefan, Bonnie, Caroline and Enzo forgot he existed and Damon never liked him anyway! Still, it did annoy me that they killed him off when Michael Trevino was looking particularly handsome with that facial hair...

At long last, Alaric gets some good material in this episode. Alright, the fork thing was silly, I had guessed from the moment that it was revealed Sybil was a siren that the fork was a tuning fork, but I will let that slide for now. Alaric's joke about getting tenure was actually funny, though whether he does still work at Whitmore College is still to be discovered. And he got to really hit Damon with his car and let his intern in on some of the stuff that was going on, so we may be finally getting progress with Alaric this season.

But his plucky intern is now working at the place that Sybil has been imprisoned. Underneath the armoury in a nice bed instead of the vampires just killing her off. We don't even know if her cell is soundproof, it will make it very easy for her to get out otherwise! Or will someone come to break her out. My guess is that it is going to be Damon...