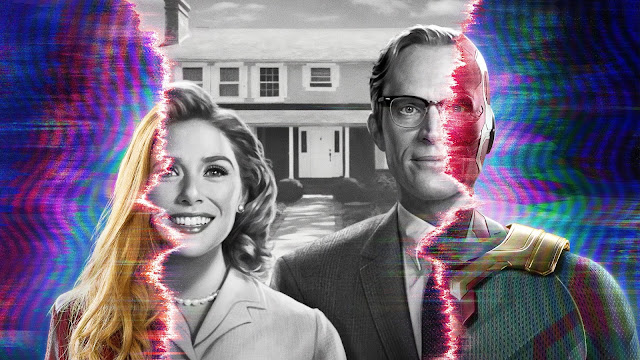 I thought I had an idea of what we were in for going into WandaVision. Turns out, I was right and I was wrong.
It's strange, this is going to be one of those shows that some love and some hate. Perhaps the biggest problem facing the show is that people just won't know what to expect. Much of the premise has been kept under wraps, a hard task in this day and age, but just going off the first episode, we're going to be in for a fun ride.
Taking inspiration from American sitcoms, we are introduced to Wanda and Vision in a jaunty theme tune which shows how they 'arrived' in the strange little town where they currently reside. Its a credit to the acting chops of Elisabeth Olsen and Paul Bettany that they manage to slip right into the 1950s sitcom vibe with ease, like they had always been there. It also comes complete with a laugh track.
Wanda is a housewife who uses her powers of reality manipulation to help with tasks around the house, while Vision works at an office where they do compute computational work, though he doesn't know where those computations do or what the company does, apart from computer algorithms. But everyone is very fond of Vision there, a man who can type faster and complete more work than any of the other employees. One of his co-workers calls him a human-computer, which is a lot closer to the truth than either one realise.
There is a large element of 1950s nuclear family ideology that can explored here too, but WandaVision steers clear of it, instead the story focuses on a series of miscommunications, with a heart on a calendar that neither Wanda or Vision can remember what its about. While Vision discovers its for a dinner with the boss at his job for a promotion, thanks to their slightly overbearing but utterly charming neighbour, Agnes, or Agatha Harkness for those comic book fans amongst us, Wanda believes its for their anniversary and begins to plan a romantic evening. 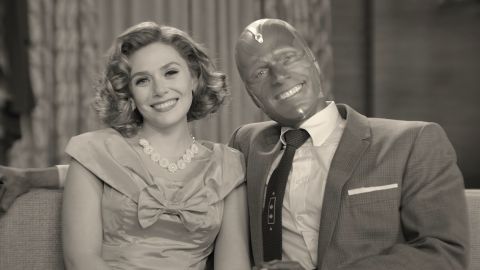 Miscommunication is one of the steadfast sitcom trope, still used to this day, but it works really well here, easing the viewer into this strange new world gently rather than overloading our brains with information. What I was most surprised about though was that not really a lot happened here, apart from setting up a mystery. I'm sure that the reason was because the production team didn't want to be overloading us, luckily the sitcom element of the script wins you over very quickly so a lack of action doesn't really matter. I'm sure lots more will happen in the future eight episodes.
But all in all, this was a great opening episode, humorous and strange and I was expecting to chuckle as much as I did. Both leads, Olsen and Bettany win you over instantly, and instantly slot into the sitcom vibes.
Here's my theory. Vision is dead and has been dead since Thanos' attack in Infinity War. Distraught Scarlet Witch has fallen victim to either Mephisto or Nightmare, and they are now trying to harness her powers of reality warping, while keeping her docile in an imaginary life with Vision. Agnes is there to keep an eye on things, but thanks to the inference from SWORD, things are starting to go wrong and Scarlet Witch is starting to realise. But will the series end with her being a friend or foe?
Episode 1 won me over right away, utterly charming, it eased me into the series nicely and set up this mysterious new world. Marvel's Cinematic Universe Phase 4 has officially kicked off and it looks like its going to go in a new and exciting direction. I can't wait!