Doctor Who: The Church and the Crown - Review 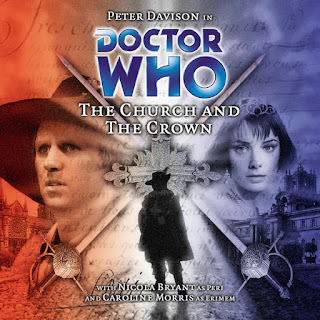 Big Finish are brilliant at making pure historical Doctor Who adventures. But what they are really brilliant at is creating pure historical adventures for the Fifth Doctor - Son of the Dragon, The Peterloo Massacre and The Council of Nicaea to name a few. And The Church and the Crown is no different. In fact, with new companion Erimem in her first adventure since she joined the crew in The Eye of the Scorpion, we have another crowded TARDIS - only this time, without the arguing.

Alright the story falls into the same traps as crowded TARDIS adventures with Peri getting separated from the Doctor and Erimem for most of the story, but this adventure gives Erimem a chance to show us what she is made of as she bluffs her way into the court of King Louis XIII, styles herself as Princess Erimem of Karnak with the Doctor posing as her Vizier. And Peri is in for a crash course in 17th Century politics as she is mistaken for one of the era's key players and kidnapped.

For the most part, being a spoof of The Three Musketeers, this adventure is swashbuckling, full of intrigue, battles, kidnappings, daring rescues and escapes. The whole thing borders on the comedic farce that is The Romans. Erimem more than proves herself a capable companion, Peri proves herself much more than a damsel in distress and the Fifth Doctor proves to be the king of sass when put under torture! This release also gives Peter Davison a chance to show off his pain acting and Nicola Bryant to use her normal accent playing another character and puts on a stellar performance.

Most of the secondary characters are successful creations, with the actors putting in fun and fruity performances. A particular favourite character of mine was Cardinal Richelieu who came across as a complex statesman who the Doctor says Dumas has unfairly maligned. Louis XIII is also well played and really comes across as an ass. We get the rough and tumble Musketeers and a plethora of well acted historical figures. The setting of the play remained unobtrusive but helped to add texture to the proceedings, sometimes the sound effects can overwhelm an audio play but not here, the background noises really helped to paint a vivid picture of 17th Century Paris.

This is certainly a lively tale and I always appreciate a tale which makes me head to the internet to look into historical periods we know little about. The Doctor and Peri even find the time in the midst of the chaos to have a little chat about changing history, something they find hard not to do in this tale...