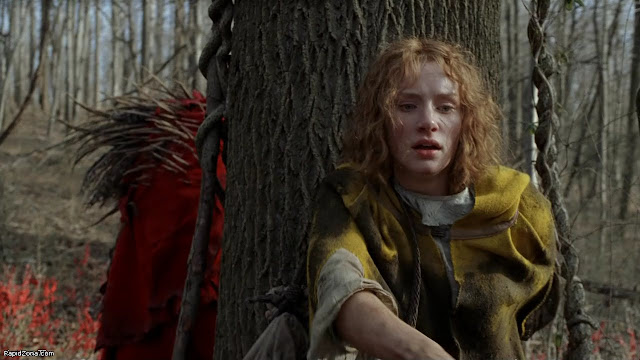 The only other movie to come from the hands of M. Night Shyamalan, I have seen is The Sixth Sense. I've seen bits from Signs, but The Sixth Sense is a movie I adore. I had heard a little bit about The Village before I came to it so I didn't know what to expect. I knew a lot of people didn't like it. So I wasn't sure what I was going to think about it. But Shyamalan somehow has managed to conjure up a crowd pleasing formula again with a Speilburgian craftsmanship. I haven't heard much about him. Maybe The Village emptied his bag of tricks. But looked at on its own merits, The Village is a skilful fusion of Grimm Fairy-Tales, horror while also managing to be a pointed parable on society and peoples needs to isolate themselves.

In a close-knit, very conservative community, ruled by a council of elders who speak in harsh tones about the outside towns, the villagers are forced to live in isolation thanks to the surrounding woodlands. The elders have managed to form an uneasy truce between themselves and 'Those That We Don't Speak Of', a murderous group of monsters who are prepared to kill anyone who dares to step foot into their forests. But when a child dies from lack of medical supplies, the village loner, Joaquin Phoenix, volunteers to go through the woods to get the supplies they so desperately need. The council head, played by William Hurt, tries to dissuade him, but Hurt's blind daughter inspires Phoenix with her curiosity and love, much to the annoyance of her unstable brother, played by Adrien Brody.

Working with cinematographer, Roger Deakins, Shyamalan relies on some old fashioned tricks to instil fear and unease in the viewer. The creatures gain their scare factor through some precise framing, stomach turning noises and off-screen space. It really does something when the films biggest scares come from momentary flashes of red. The only problem is that Shyamalan isn't as talented on the writing front as he is behind the camera. The script he produced has some massive pacing issues, the plotting isn't brilliant and has nineteenth century dialogue sounding like something which Yoda would be proud off!

But The Village works as a brilliant, if scary, look into what isolation and the pursuit of knowledge can do to a community. The massive twist at the end is brilliant, putting in perspective some of the lines said earlier in the movie. But it isn't some massive rug-pulling move, but one which should resonate with people. Especially people who are wary of their own persistent threats and sealed borders. Shyamalan manages to give us a movie which looks good and one in which the scares work, now if he could get some more writing lessons...