Doctor Who: The Hesitation Deviation - Review 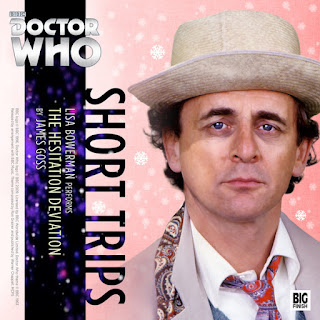 December 2016's Short Trips range was brought to an end with The Hesitation Deviation, written by James Goss. The story featured the Seventh Doctor and his companion Bernice Summerfield. Benny continues to be played by Lisa Bowerman who also plays the role of director for this release, probably through the use of a time-machine!

As it was released in December, this is a Christmas tale. It is also nice that it is a real Bernice story, where she finds a planet which celebrates Christmas just right, with the right amount of mince pies and mulled wine.

Of course, this doesn't last very long and it isn't long before a menace springs a nasty trap on the Doctor. And only Bernice can save the day. But of course, only by making the ultimate sacrifice. Bernice is faced with the prospect of having to make the ultimate sacrifice, one she may not even remember making!

As this story comes from Goss, this is a funny story with plenty of clever twists, cleverly designed to keep the listener guessing right up until the end. Lisa Bowerman is brilliant as the narrator, delivering the tale with obvious relish, giving us another story that helps The Short Trips range to continue going from strength to strength. This is really wonderful stuff.