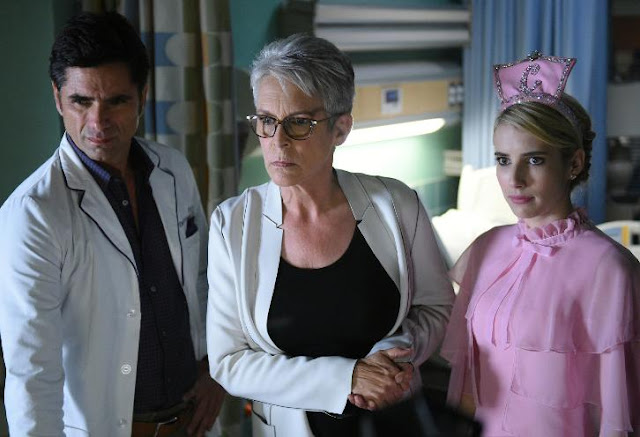 The last episode saw Chanel conjure up a nasty little plan of recruiting more Chanel's into her little gang to act as cannon fodder against the killer to try and keep herself alive. And the plan works, as the Green Meanie does strike again, killing a few members of the new Chanel's. Zayday also became convinced that the killer had to be Chamberlain, the man she has befriended who spends his time going from bed to bed in the hospital, determined to spread joy. And Munsch is determined to stay ahead of her illness, while the news of a serial killer brings a lot more patients to her doorstep.

We pick this episode up, not far after the previous one had left off. The hospital doesn't have any blood for transfusions except for spoiled samples which one of the Chanel's has been sweeping off the floor into blood bags in a misguided attempt to not let the dead have died in vain. Chanel then suggests a blood drive and sets about trying to win the competition so she can go away on a romantic holiday with Dr. Holt.

During these scenes we learn that Nurse Awful, or Ingrid Hoffle, is the sister of the maid that was murdered by Chanel in season one, when her head was pushed into a deep-fat fryer. We learn that she isn't the killer, which I believed she was, but she does plan on murdering all the Chanel's for the parts they had to play in the death of her sister. In Hoffle's scenes we do discover who 'one' of the killers is, that's right, there is more than one Green Meanie! It is none other than Taylor Launter's character, Cassidy Cascade. He invites Hoffle to be the third Green Meanie.

Lea Michel is on fine form in this episode as the insane former Chanel and brilliantly nails all the comedic punches that are thrown at her, from standing over Chanel's bed with a knife claiming she is bored, to her treatment of a man who thinks he is a vampire, force-feeding him things with blood in, until he can't stand the sight of it. Chanel also gets some good scenes, hilariously continuing to drain Chanel #5 of her blood in an attempt to win the prize to the island. Poor Chanel #5 is O- which is the most common blood type on the planet and therefore, the one in constant demand. Chanel #3 remains cool, calm and collected as she is brilliant! But poor Chanel finds her blood has come back, testing positive for every sexually transmitted disease known to man. The following scene was laugh out loud funny, with Jamie Lee Curtis nearly chewing the scenery in joy at the comedy.

Chamberlain claims his innocence as he knows what Zayday believes, while Chanel locks Chanel #9 away on a blood donation. She becomes the next victim of the Green Meanie, who drains her of her blood by connecting bags to her all over her body. But the final moments of the episode need the viewer to suspend their disbelief, the members of the hospital actually think that Dr. Holt is the killer?! He is like 53, something which he mentions, although being flattered that everyone thinks he is a lot younger than he actually is.

So know we know there are at least 2 killers on the lose, with the supposed third one's identity not yet revealed. We are sure to now find out about their backstories. And can we just mention how cute Taylor Launter looked when he took off the mask, I think it was his hair, but he looked particularly handsome here! The plot thickens, much like the blood in Hester's blood pies...