Once Upon a Time: Season 3 Episode 4: Nasty Habits Review 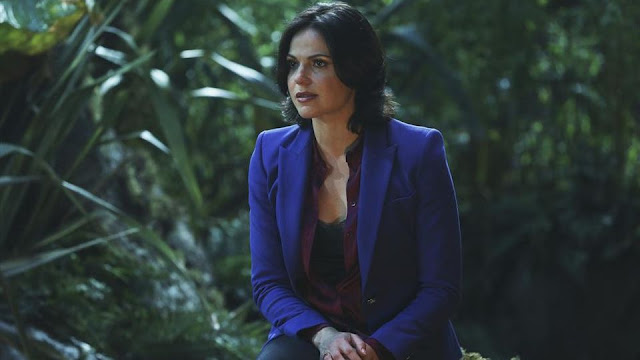 Praise has to be given to Michael Raymond James who has managed to make Neal such an interesting character over the past season and any screen time he gets with Robert Carlyle is a delight for everyone. It was nice to see their parent/son relationship flipped in this episode as Neal takes on the parent role to show Rumpelstiltskin around Neverland. It was also smart to put them into a situation where they would be forced to work together and push aside their parent/son issues for the sake of Henry.

Thanks also have to be given to the writers for making Rumple's intentions so clear. You instantly know he wants to save Henry but we aren't quite to sure about the lengths he will go to, to get the job done. And those lengths don't change in the slightest when he learns Neal was alive. I hope they continue to keep Rumple's plan of self sacrifice until Henry is safe as it will make his character a lot compelling to watch and give him a possible reason to flip and return to his old, Dark One ways.

But the conversations between Baelfire and Rumple in the flashback sequences felt too familier. They don't reveal anything new about their relationship and feel like scenes we have watched before. So if new aspects of their relationships can't be explored, why bother showing them at all?

However, through showing us their distressed past explains much in the way of why Rumple behaves like he does in the present. It also succeeds in showing us why Neal is so distrustful of him. And you can't blame him as Rumple was a killer. Carlyle and Raymond James nail every scene they are in.

Captain Hook gets some good lines tonight especially when a threw a common hero line back in Charming's face. It was perfect. It is just a shame that Hook is being so underused at the moment. Actor, Colin O'Donoghue is so fun to watch in the role and the show's whole take on the character of Captain Hook is really enjoyable. But he has the potential to do so much more than just deliver one liners. It is a good job that the next episode looks like Hook features a lot more in it.

I also really like Robbie Kay's take on Peter Pan. He is young enough to believably play this evil character. He really handles it well. In a show like this, you would sometimes have to be a touch over the top to deliver some of the lines properly but Kay somehow manages it. And as he stands toe to toe with the adults on Neverland, you really believe he is in charge of this strange land.

But why won't Charming tell Snow about his deadly wound? As they have been through so much together, it is a little hard to wrap your head around why he is lying to her. She isn't the kind of woman who spares her feelings and she would want to know so that she could help. Something is just off about him at the moment.

This episode is probably the strongest of the Neverland adventures we have had so far. Carlyle and Raymond James stand out particularly and the reveal about Pan's and Rumple's connection will make for an interesting flashback at some point in the future. Lets all just try and look past how Henry got re-captured so easily but it leaves a carrot dangling to make us come back for more!