Doctor Who: The Eleventh Tiger Review 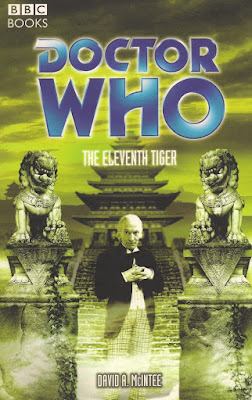 Reading The Eleventh Tiger, I was forced to wonder if authors try harder when they write for the First Doctor. Could it be that many writers don't want to spoil the legend? This book is easily the best thing that author, David A. McIntee has written for Doctor Who, beating his Third Doctor novel, The Wages of Sin which is also a cracking read! McIntee gives us a more fun version of the First Doctor and he is obviously pleased that he has people around him, he even gets a little Yoda martial arts scene and his characterisation here matches that from the television series perfectly. Not to mention the setting and time zone are absolutely perfect for the First Doctor.

Perhaps what stands out the most about William Hartnell's incarnation of the Doctor is that he stands out when he is in the TARDIS in his Edwardian frock coat and checked trousers but seems to fit in perfectly in whatever setting he finds himself in. I think that the Doctor sees something of himself in his granddaughter Susan or in this novel his young companion Vikki. It is obvious in this novel that everyone the Doctor meets in important to him. The Doctor is left in charge of an institution called Po Chi Lam and it feels right and he is indomitable and as strong as iron. In fact, he gets very upset when the younger people of the institution tell him he is too old and challenge his authority. But the truth is, the Doctor doesn't belong to one time nor does he belong anywhere. This adventure feels like it is exploring that little part of the Doctor's personality, could he, if he wanted, settle down? The answer, is no. The relationships in this novel are as far away from the first moments of An Unearthly Child where the Doctor practically kidnaps travelling companions Ian and Barbara as you could possibly get and demonstrates how each character has matured throughout their travels. The Doctor did after all, kidnap them to ensure his granddaughter's safety and who wouldn't do anything for their family? But it was that silly act that made the Doctor seem less cold and gruel. He truly has come a long way from trying to leave his unwilling companions in caveman times.

It is the relationships in this novel which really make it a great read. But it is what is going on between Ian and Barbara that makes for the most interesting of reads. We all know that Ian and Barbara acted like they were married, something which this novel addresses and it is obvious that Ian would kill or be killed for Barbara, something else which this novel addresses. We also get some lovely little insights into their minds, we learn that Barbara has always enjoyed the rain and that Ian was never religious even though he tries to hold onto the core values of the Ten Commandments which he was taught as a child. And of course the book ends on a little proposal for them both with Barbara asking Ian if, when they get back to London, he will marry her, to which Ian replies, "Yes."

The Doctor's other travelling companion doesn't get too much to do here but that's alright as there is so much else going on that one of them was going to pushed back slightly. We see that Vikki is obviously attracted to Fei-Hung, a man they meet at Po Chi Lam but nothing happens as he is already engaged to someone else. So Vikki is consigned to sitting back and quietly learning martial arts. But it is important to remember that while Vikki might be from a more advanced time, she is still just a child.

What I also really liked about this novel is that the fight sequence between the Doctor and Jiang which is told through the eyes of his companions rather than through the Doctor. It was interesting to read what his friends made of this little match. And of course, one has to smile at the Doctor trying to deal with children and giving up, letting Ian and Barbara dust off their teaching skills. What this book also does well is making us think that the character called Major Chesterton is Ian. He isn't Ian but the book makes us think so especially when we find out he is suffering from amnesia and can just about remember a dark haired woman from a trip to Italy nicely hinting to us that it was Ian and Barbara from The Romans.

The Eleventh Tiger is successfully atmospheric and succeeds at educating, amusing and giving us delightful little surprises. Easily McIntee's best work for the Doctor Who novel range, the book captures the Doctor, Ian, Barbara and Vikki perfectly and gives us some truly memorable secondary characters. With an amazing cover and great contents, The Eleventh Tiger is a book you simply must pick up when the price is right. And, even though they are fictional characters, with the way this book ends, you can't help but wish Ian and Barbara the best of luck in the future! A complete triumph.