Doctor Who: The Ambassadors of Death Review

From Jon Pertwee's first year as the Doctor, The Ambassadors of Death is the weakest serial from the four serials that were seen in 1970. And while it isn't perfect, there is a lot that goes on that I really enjoyed. It really epitomises what the production team at the time were trying to do, lure in a larger audience by blending science fiction with high octane thriller elements to create something along the lines of The Avengers. The high action location sequences are a classic example of that, in fact, they stand out like a big neon billboard. But there is a lot of other things, more subtle things that are going on in the background, not least the fact that they were trying to make the titular aliens something that was truly alien, something so out of the world that we have trouble communicating with it or understanding it. There is also an interesting villain here in the form of General Carrington, someone who isn't truly evil but someone who has become twisted by his own inner traumas.

But the story begins like many a Doctor Who adventure with a mysterious spaceship approaching Earth with the promise of terror and mayhem ahead. Even though at this time the Doctor had been exiled to Earth it was nice to see some spacy stuff again and a story about astronauts was the main hook for the serial with the various space programmes going on in different countries around the world. Neil Armstrong had walked on the moon little over a year before this serial was made and the Apollo 13 accident happened the same day as episode 4 was broadcast which was ironic given what the storyline for this adventure was. Like the previous year's story, The Seeds of Death, episodes 5-6 featured a lot of the Doctor piloting a rocket and displaying him going through the motions that real life astronauts have to go through including decontamination. 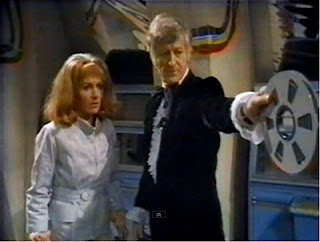 It is the earlier episodes that set up the tenser and grittier plot and foreboding mood that underlines the entirety of this story. It is the final moments of a rescue mission for Mars Probe 7, the latest manned expedition for the red planet. But something has gone wrong, there has been radio silence for months which started shortly after they landed and while it could be a simple malfunction, it could also be something far more sinister...

All that is known is that Mars Probe 7 took off and is about to reach Earth again after a seven month journey. But just what is to be found inside. Could it be a floating coffin as someone calls it or will it be something even worse? When the airlock of the probe opens and there is an ear piercing shriek that is heard all over Great Britain, the worst is confirmed. Having been monitoring the situation and seeing it unfold, the Brigadier sends for the Doctor and his companion Liz Shaw to investigate. The Doctor recognizes the scream and already has a way to decode it.

For audiences at the time, the serial must have seemed a lot like The Quatermass Experiment which featured astronauts returning to Earth only for people to find they had been replaced by alien imposters. However, for modern audiences I think we can see that things aren't all that they seem. Sure they are aliens and they can be deadly and destructive but the lines between good and evil aren't so easily drawn here. In fact, The Quatermass homages are something of a red herring as the story takes on more of a Day The Earth Stood Still vibe with aliens who herald peace nearly causing a major war because people are filled with too much prejudice to see past their bigoted thoughts. In this story the plot is driven by a conspiracy to kidnap the aliens and get them to commit acts of murder and vandalism that will turn public opinion against the visitors while the Doctor, Liz Shaw and UNIT investigate. 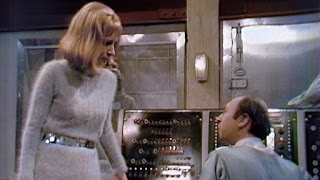 Unfortunately, like so many of the longer Doctor Who serials, this adventure begins to spin its wheels about half way through mainly to draw the story out before returning to a sharp finish at the end. However those middle episodes make good use of action and stunts performed by HAVOC, a group of stunt men formed in the late sixties and took part in many of the Jon Pertwee adventures. And we get plenty of gun battles, fist fights, leaps, bounds and car/truck/helicopter chase sequences that keep the viewer invested in the story. I still think the scenes with Liz trying to escape from her pursuers in Bessie and throwing herself off a jetty at the end is one of the most exciting cliff-hangers we've had in the history of the show!

But I think that the core problem that plagues this serial is that a significant chunk of the plot is hidden away by a bad attempt to keep the identity of the mastermind a 'mystery'. Personally, I think that the attempt to keep Carrington's true motivations hidden until the end of episode six a terrible mistake, simply because why he is doing all he is doing is the story.

However, Carrington's treachery is apparent from the very first episode when he climbs out of a window at the warehouse that the Brigadier and UNIT raid when they locate the source of the scream. And although the story throws plenty of other red herrings about the character at us, the eventual reveal just isn't shocking because we've known about it from the start. Just who did the writer expect us to believe was really behind it? It could have been Reegan, a madman who takes his orders over the phone but no way is he clever enough to set it all up and this is repeatedly shown in the scenes where the captured Liz Shaw gets one over him much to her delight. And the completely needless mystery comes at a dear price, there is no back story to explain why Carrington hates the aliens so much except for a quick explanation that he was on the last Mars Probe which ended badly with the death of his expedition partner. It was a tragic accident but his guilt mixed with his confusion about the alien creatures has sent his mind into a frenzy. So paranoid he has become that he is determined to prove to Earth that the ambassadors are evil, even if he has to resort to making them commit evil acts that go against their natures. So consumed by xenophobia is Carrington that he doesn't even realise that he is going to cause the catastrophe he is desperately trying to avoid at any cost. 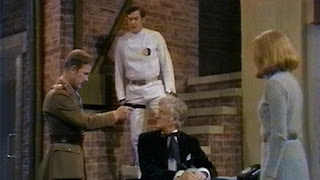 I think that we could have a little flashback sequence somewhere around episode 5 where the Doctor is in a rocket headed to the probe. Not only would it have been beneficial to see the first encounter but it would have set things up that explained Carrington's character and why he doesn't like the aliens. But why Carrington bother to kidnap the ambassadors at all? The answer is that he thinks they are evil and must be destroyed. He's wrong of course. But, why didn't he just kill them if he didn't like them that much? Why didn't just starve them of their radiation or blow their ship out of the sky with a missile? These are things he only suggests towards the end of the story when his plans begin to fall apart around him.

What Carrington doesn't realise is that what he is doing is personal. Not only is it the elimination of what he deems a dangerous threat but it's payback. The humiliation and torture of the aliens is the payback he deems the aliens deserve from the things he witnessed first hand. But what he doesn't remember is that what happened was an accident. Like many of the human race nowadays the first thing he does is jump to conclusions and as a result, many innocent people are harmed.

When the Doctor reaches the missing human astronauts he finds his rescue attempt hindered by the fact that they already think they are on Earth. The aliens explain that they had no choice but to put them under mind control otherwise their surroundings would have driven the humans insane. But, what is left bubbling close to the surface but not mentioned in that scene is that Carrington must have experienced the same thing when he encountered the aliens and the reason he cracked up then, is the reason the aliens are concerned for the sanity of their current visitors now...