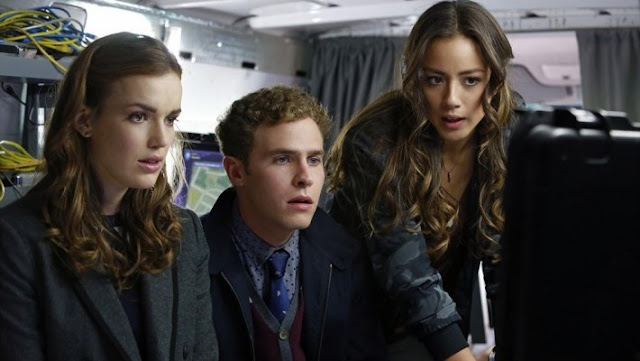 Just the opening scene to Eye-Spy sets this episode apart from has come before. It is a cool sequence which has a different tone and slightly edgy with those men in creepy red masks boarding an underground train. That was all before one of those men gets his hands chopped off! It works in Agents favour that the show isn't afraid to switch up the genres with this episode being especially gritty.

Luckily the clunkiest section of this episode comes not long after the opening scene with a scene in the lab of Coulson's bus between Fitz, Simmons and Ward arguing over something that Fitz invented called the Night-Night gun. I could have also done without Skye's line about missing her life in her van... who really enjoys living in a van?

Another little annoying moment was when Fitz, Simmons and Skye were attacked in their undercover van. It is acknowledged in the episode but why aren't this half of the team at least slightly combat ready? Surely it makes sense to have a whole team of combat ready agents, or is that just me? It was nice to see though that Skye is at least learning and her trouble with her gun magazine did make me laugh.

Once we get past these scenes, the episode greatly improves with Akela Amador's inclusion as Coulson's former protégé giving it an interesting twist. It got especially interesting when we found out her motivations. What was also surprising to learn was that in the Marvel Cinematic Universe, telepathy doesn't exist. This is to draw a line in the sand for those who expect the X-Men to turn up at any moment. But even so, it is interesting to learn that telepathy won't exist in the movies. Well, not in a Professor X way anyway.

Also enjoyable was the fight between Akela and May. Although it was brief, it was May's efforts to avoid shards of flying glass without flinching that showed how badass she is.

This is also a very good episode for Ward, a character that some had complained about not getting enough to do. Personally, I thought he had had plenty to do in the previous episodes but he really comes into his own in the second half of the episode, where he undertakes Akela's mission while Fitz and Simmons try to remove her kill switch. It was also funny to see him being told to seduce the male guard right after saying he would do whatever it takes to complete the mission. He tells Skye that he doesn't think he would be the guard's type. Personally, I think he would be anyone's type and he looked rather dashing in those glasses didn't he!

Akela's handler turns out to some poor soul forced into doing the bigger baddies bidding but is still dispatched an in a good way and this episode succeeds in showing us the wider stakes for the series.

What was also intriguing was Akela's note that something was wrong with Coulson. Hopefully, her noticing of that fact will mean that the show is going to explore that avenue rather than just leaving it as he came back to life...