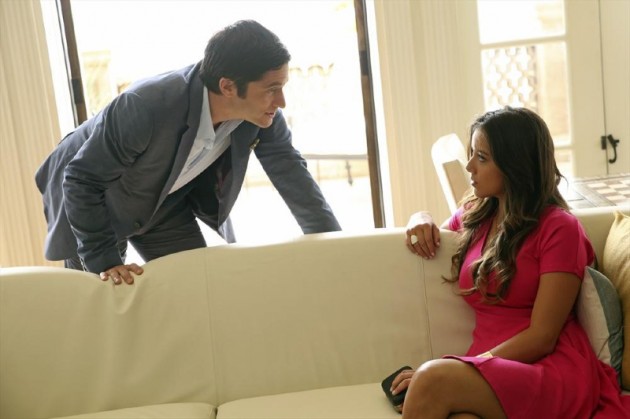 The Asset is an important episode of Agents as it gives us our first proper supervillain origin story. They pull a pretty notable villain from the comics and dump them in the wider universe and given that I enjoy the Avengers spin off, The West Coast Avengers, I was delighted to see Graviton turn up.

If you are a die-hard comic fan such as myself, you should have no trouble in identifying just who the hell Dr. Franklin Hall is. Or if you need it, there are plenty of mentions of Gravitonium that should tip you off. But if you don't read the comics and don't know who Franklin Hall is, then you don't have to worry as it gives us the birth of one of the most powerful villains of the Marvel Universe. It also did a good job of introducing us to future Agents villain, Ian Quinn who gets the 'I'm a baddie' point across right away, though it is quite difficult for me to see actor David Conrad as anything other than Jennifer Love Hewitt's husband in Ghost Whisperer! This episode also gives us some nice little plot twists, like Skye basically outing her involvement with The Rising Tide to Quinn so she can gain his trust and the revelation that Hall had planned his kidnap from the very beginning.

But this show still needs to find the perfect humour balance. In the pilot episode, it got it right from the beginning but that vanished in the second episode and here it is still a bit of a problem, getting in the way of telling the actual story. It was Skye who suffered here on the comedy front with her speech to Ward about being a big brother coming across quite cheesy and the moment where she reveals to Quinn that she can't shoot him just overdoes it. It's unfortunate.

And here, there were just too many mentions of other Marvel movies. It was alright when Hall mentioned the alien invasion of New York, that is sort of expected to just pop up in conversation given the world they live in but what was Coulson talking about when he mentioned seeing plenty of action with The Avengers? I thought he died before they saved the world? Surely it would have been better to mention the missions he had had with May?

Fitz and Simmons get some improvement here and get some good lines, Simmons with her 'repeating his name doesn't help productivity!" and Fitz's little line about Skye, "She's probably using her...uh...boobs!"

There are moments here which show us how fun this show is, with the truck taking off thanks to gravitonium and Coulson and Hall's sequence on the ceiling of a gravity-less room. And with the introduction of Graviton, this should lead to some epic showdowns in the future. But if this episode taught us anything it's that, it is always the quiet ones...