Doctor Who: The Land of the Dead Review 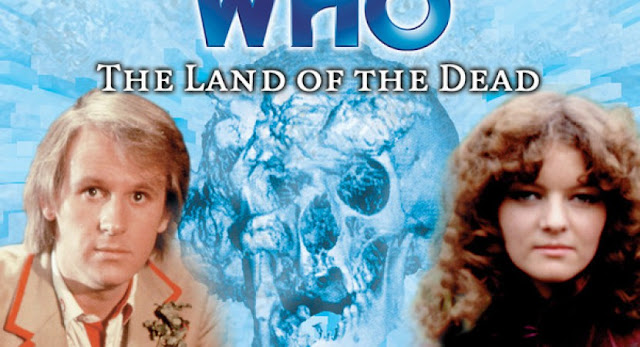 "Its not life from Alaska. I'm not sure its even life from Earth..." The Doctor

The nice thing about these audiobooks is that allows more stories to be told with short-lived TARDIS teams, in this case, the pairing of the Fifth Doctor and Nyssa, played by Peter Davison and Sarah Sutton.
I've always liked Nyssa, she holds the top spot with Tegan as my all time favourite companion in the series. Its not hard to understand why. Nyssa was smart, inquisitive and calm but she was haunted by the tragedy bestowed upon her by the Master, depicted in the stories, The Keeper of Traken and Logopolis.
Big Finish have created a lot of stories with this team, bridging the gap between the stories, Time-Flight and Arc of Infinity, where Tegan was absent after being left behind in Time-Flight. There are a number of great stories with this pairing but, sadly from this story standpoint, this excellent pairing gets off to a slow start.

The Land of the Dead takes place in "present day" Alaska and the story focuses around eccentric bazillionaire Brett who has constructed a house made up of rooms built from natural sections of the Alaskan frontier. Brett's father had been running an archaeological dig years ago where a cave in killed some of the native workers. The dig and the recent work done on the house unleashes some sort of ancient creatures that predate the dinosaurs and threaten the lives of our heroes.

Written as a hasty replacement for the first Sylvester McCoy audio story, The Fearmonger, when it became apparent that McCoy wouldn't be able to attend the recording.
This left Stephen Cole with a week to create a brand new story to fill in the gap.
All things considered, this isn't that bad of a story, it just comes across a bit bland. Nyssa and the Doctor spend most of the story split apart which gives Nyssa a lot to do, and the Doctor makes the acquaintance of the house's interior decorator Monica, who comes across as a poor impersonation of Tegan.
Ultimately, The Doctor finds a way to stop the creatures, in an uncharacteristic way of killing them but he does have plausible reason for this drastic resolution.

This is story that doesn't do a lot for the listener. By no means is it a bad story but things just go so slowly, they are virtually at a stand-still.
It is encouraging to know though, that there are better things for this TARDIS team to come.