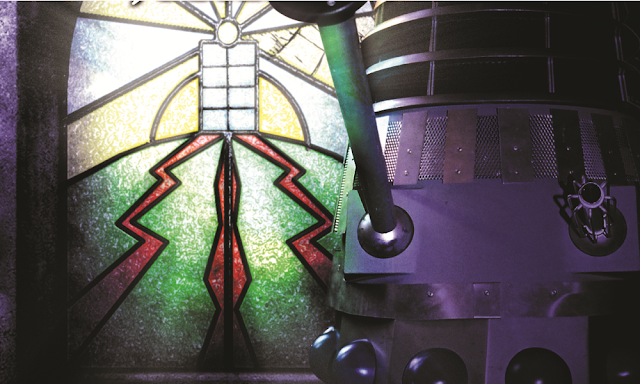 When Jubilee begins it sounds like every other Dalek story in creation...until the Daleks start chortling evilly. Things then turn a complete left when the Daleks start screaming, "Scar-per, Scar-per, Scar-per," at the mere sight of the Doctor.
This is the trailer for a new movie that promises, "More action! More Excitement. More Daleks being blown up in very loud explosions!" and a long kiss from Evelyn "Hotlips" Smythe.

This is the glorious English Empire that is about to celebrate its fortieth anniversary jubilee of its salvation from the rule of the Daleks. Its a happy land where contracting words is illegal, women are taught to be docile and America has been reconquered. And no one can sully the purity of the British.
Its a land about to rejoice in their celebrations and its all thanks to a man called the Doctor, who vanquished all the Daleks.

All except for the one trapped in a basement. About to be let out for the jubilee.

Now the real Doctor and Evelyn have arrived and are forced to consider who the worse enemies are, the Daleks or the Empire? And without the TARDIS, which has malfunctioned and disappeared, can they stop either of them?

Most famous for being turned into the first Dalek story when the show returned in 2005, Jubilee is less about the discovery of the creature and more about the bigger shocks, and making the audience think about the idea of propaganda and marketing and wonder if we are any better from the Daleks. In fact at one point, the Doctor asks Evelyn, "Are you any better?" And she can't deny it.

Every listener is going to have a ball listening to this story, when they're not shivering from the casual terror of the story.