Night of the Living Dead - Review 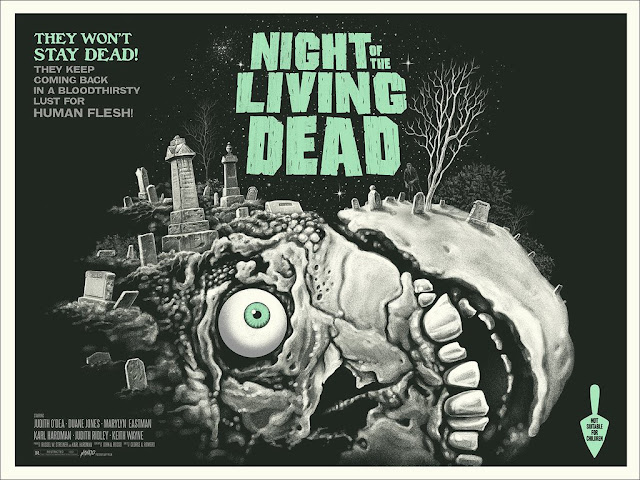 It is no understatement to say that George Romero's Night of the Living Dead, first released in 1968 is still every-bit of the nightmare it must have been way-back-when. Even from the opening moments, you get a sense that something isn't quite right, an empty graveyard and that would go on to be a staple in every zombie movie since. Barbara and her brother Johnny are visiting their father's grave when they are beset upon by a recently deceased walking corpse.

The whole opening scene sets up perfectly everything that is to follow. Like the characters, we viewers have absolutely no idea what is happening here. Johnny dies pretty quickly, and Barbara is forced to flee. The zombie chasing her is made even scarier because of his sheer size and he looms over her in a satisfyingly scary way. I found the first scene to be perhaps the scariest piece of this movie and I really felt the fear and terror that Barbara was experiencing.

Romero has frequently said that he had no intention for the movie to become a part of the civil rights movement when he cast Duane Jones in the leading role of Ben and no doubt that is true. But this film has gone on to be explored for its undercurrents, not only for its civil rights commentary but also its take on the Vietnam War. Indeed, the zombies storming the house could be a metaphor for the mindlessness of the army and towards the end of the movie, one character talks about a 'search and destroy mission' an actual tactic used during Vietnam. It is hard not to parallel the survivors of this movie as besieged innocents while a mindless army storms in around them, ripping their lives away.

And that's what happens, there are no happy endings here, the whole thing feeling more like a waking dream than anything else. Johnny is left for dead right at the beginning and Barbara is so shocked she doesn't snap out of it right until the end when she helps Ben to try and keep the horde of undead outside. We've got the infamous and brutally brilliant scene where Helen is killed by her zombified-daughter with a garden trowel and Harry meets his end after betraying the group. Judy and Tom, a young couple meet a nasty end after being blown up in the car they are trying to get everyone away in and then become the zombie's first meal, gruesomely brought to life with cooked chicken covered in chocolate sauce. And then is poor Ben, shot dead right at the end after the rescuers mistake him for a member of the undead.

A scene I also found particularly grisly was the end credits which is a series of photographs dubbed over with the dialogue of the rescuers in photographs that feel like they have been taken from somewhere like Auschwitz. The idea of burning the bodies is horrible as well, especially as you know that Ben wasn't a zombie.

Two further points that set Night apart from any other zombie movies in a similar vein is that there aren't any real protagonists here. All of the survivors are victims in some way or another, with the characters anxieties and fears working against them. Barbara feels like, in any other movie, the 'Final Girl' but here her shell-shocked state means she meets her fate just as she begins to fight again. Judy can't leave Tom behind and so seals her fiery fate. Helen is brave but her vulnerability is that of her daughter who kills her towards the end. Harry feels like a traitor by nature but how much of that is out of fear here and how much of it is nature is left tantalisingly hanging for viewers to ponder on. And, if we are continuing along the social commentary line, then Ben is a victim of a cruel society, even Barbara is frightened of him when she first meets him, even though he is trying to save them both.

My other point is that there is no hope here. Pretty much every other zombie movie features some safe haven, somewhere for the characters to escape to. But that doesn't feature here. It's a film where hope hangs just out of reach. There's a car, a petrol pump, keyless cars, a gun. But all of those elements end up spelling doom for these characters. In fact, with the exception of Helen and her daughter, these zombies don't actually kill any of the survivors. It just seems like fate has it out for these guys, like one hell of a stress dream where all control is taken away from you. There is only one survivor of this movie and that is the viewer.

In a world full of Hollywood big-budget movies, Night of the Living Dead probably wouldn't compare at the box-offices of today. But it is impossible to not see why it was such a smash hit in 1968. Nowadays movies go overboard on the gore and the special effects. But Night of the Living Dead proves why it is a real nightmare to watch. It's stripped us of control, its given us a threat that won't stop until you drop dead and no one, not family, friends, lovers or neighbours can save you. And there is nothing scarier than that.