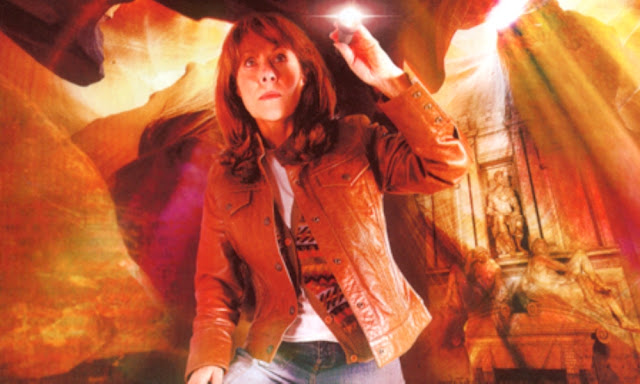 Five years before turning up on Bannerman Road and befriending Luke, Clyde, Maria and later Rani, Sarah Jane was having adventures with Big Finish. These stories took a grimmer outlook and had less sci-fi going for a thriller vibe instead. The debut series of these adventures was a mixed bag. Elisabeth Sladen was as brilliant as ever, Jeremy James and Sadie Williams were good as her companions Josh and Nat, but the stories were lacking from strong writing and the result was only two worthy stories out of five.

With the first series having come out in 2002, the second series didn't come to our headphones until 2006, following on closely from Sarah's return to Doctor Who in School Reunion. Shortly after her return, she was given her own series, The Sarah Jane Adventures and so this range came to an end after two series. With Series One having been written by many writers, Series Two was written by David Bishop, a man who had delivered the best release from the opening series, Test of Nerve.

The finale for Series One, Mirror, Signal, Manouever, saw Sarah and her gang come up against Hilda Winters, the villian from Tom Baker's debut, Robot. Buried Secrets dumps the continuity and tone of that first series with a news broadcast telling us of Winters' death.  It is established that it has been a few years since that last series and Sarah's gang have dispersed around the world. Sarah is trying to avoid the public eye after the death of Hilda, Josh has been working in a series of jobs, none of which were as exciting as helping Sarah and Nat has moved to Italy to help with an archeological dig.

The tonal jump is a little jarring but it is obvious that Bishop is trying to get rid of everything that didn't work last time and create something new and fresh. On its own terms, Buried Secrets is actually a really fun way to open the new series but it does spend too long setting up the new status-quo and doesn't focus on the plot as much as it should.

In addition to the changing characters of Series Two, Buried Secrets introduces us to Will Sullivan, the younger half-brother of Harry Sullivan. While his presense doesn't really contribute anything to the story overall, I'll assume he is an important character as the series progresses. Will is brilliantly performed by Tom Chadbon, who played Duggan in 1979's City of  Death and his interplay with Sarah works brilliantly. Will knows a little of what happened to Sarah,  Harry and the Doctor and this gives Sarah someone to connect with in a way she can't Josh or Nat.

But the plot of Buried Secrets is so slight that it is a waste of time calling it that. It is only in the second half of the story that Sarah finally goes to Italy where Nat has been detained for questioning in the murder of a archeologist. Sarah doesn't investigate the murder as much as she does falls into the final moments, but as the story comes to its conclusion it is obvious that there isn't the time for anything more complicated. Of course, there is a staggering coincidence between the murder and a final letter Sarah recieved from Hilda Winters, reminding us of the less pleasing aspects of the first series.

Other than Sladen and James, the rest of the cast just sort of wade through the material they have been given. Josh makes some really stupid decisions here, even more stupid than normal but Jeremy James's performance more than makes up for that. No-one seemed to know what to do with Nat apart from Test of Nerve and Mirror, Signal, Manuever and here, she is just there. The lackluster performance from Sadie Miller doesn't help matters either.

None of the other guest actors distingish themselves either. The only memorable performance comes from Daniel Barzotti as Luca. He has previously appeared in Master as another Italian character and he does a decent job, even if I did think it was Barnaby Edwards doing a funny accent until I read the cast list! And the late Jaqueline Pierce is on hand to give a performance as the series's overall villian, playing it like every other villain Jaqueline Pierce has ever played.

However, like the weaker installments of the first series, Buried Secrets is enjoyable enough for the characters and its plot largely feels like a setup for the whole series arc. Hopefully with the setup out of the way, Bishop will deliver some great scripts as the series goes on...