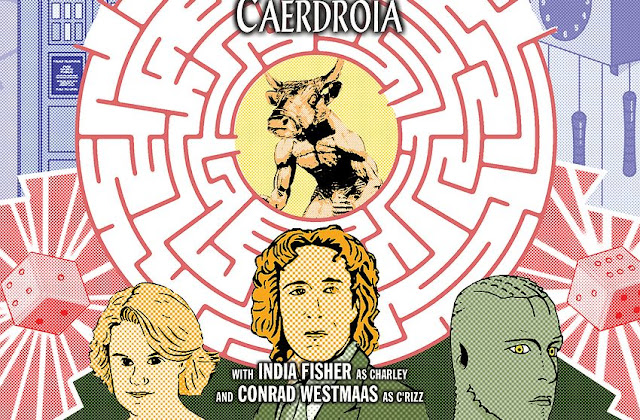 From its very opening moments, Caerdroia lets us know that it is going to be something very different, and given the highly experimental feel for the Divergent Arc stories, that is saying something! But it is the impact this story has on the whole set of stories that really makes it stand out.

We've got the first proper use of Kro'Ka, who has been the recurring enemy for the Doctor and the gang over the course of audios since Scherzo, but who has only ever made brief appearances. Here though, he gets to be in the action, and while the Divergents have been some-force hidden in the shadows, Kro'Ka gets to be their representative.

But Kro'Ka's involvement here is more important than that, because it finally gives the Doctor, Charley and C'Rizz something to fight against and they begin to finally get some answers as to the Divergent universe. And most importantly, we finally learn where the TARDIS has been hidden all this time.

What follows is a quest into some bizarre world of labyrinths, minotaur's and pointless bureaucracy. I've always enjoyed these more fantastical Doctor Who stories which incorporate elements of myths and legends to the more heavy sci-fi that grounds it all. In many ways, this story will remind you of The Mind Robber, one of my favourite Patrick Troughton stories. And while Caerdroia isn't as fantastic as that story, it certainly has a lot fun trying to be.

Paul McGann is given an awful lot to do here as well and that is a development that it would be a crime to spoil. But all I'll say is that it gives us a great new look at the character of the Doctor. McGann gets a lot more material to perform here, no just serious drama, but some lighter comedic moments too.

And after many bleak stories in this set of stories, like The Twilight Kingdom and The Last, Caerdroia feels like a breath of fresh air. It's one of the more fun McGann stories that I've listened too in a while, with the Doctor and his friends finally getting to enjoy themselves, despite their dire circumstances. And it is brilliant how well this story ties up the whole Divergent arc.

That is a strange thing to say too, because the ending of this story feels like they can finally explore this dangerous new universe without the interference of Kro'Ka and the Divergents and they can go anywhere they please.

Released just before the television series came back in 2005, Caerdroia actually feels like a series conclusion with the Doctor, Charley and C'Rizz going off to explore a brand new universe. But if finally feels like the Divergent Arc has kicked into high gear...