The Flash: Season 5 Episode 3: The Death of Vibe - Review 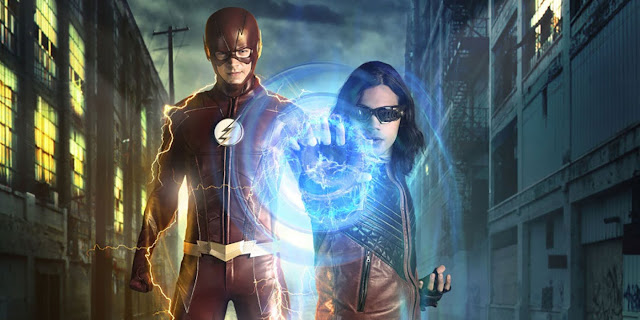 So far this new season of The Flash has quickly established the whole cast as a family unit. But within that family unit, there are some family struggles too. Iris is struggling with Nora and while that storyline is proving to work in the show's favour so far, there still seems to be a long way to go with the show's supporting cast. The Death of Vibe is the first episode this series to turn its attention to Cisco, Caitlin and Ralph. It also introduces us to a new version of Harrison Wells and the results from both plot points are mixed at best.

One thing I liked was how quickly this episode set up the notion that Nora inherited her father's ability to screw up the timeline and make things worse. The opening moments of this episode lends itself to give us more context into her decision to come back in time and meet her father and the threat that is posed by Cicada. We now know he is a serial killer who never got caught on this Earth, even when characters like Supergirl, Arrow and the Legends came up against him. I thought that was a nice touch. But while that was all interesting it was a really nice move for the show to make by making it all Nora's fault when she travelled back in time she made it so that Cicada was never caught in her timeline.

Another cool moment was when Nora namedropped, 'The League', almost confirming that at some point the Arrowverse will give us our own version of The Justice League. Maybe this will be something we see come into being at the end of the upcoming crossover event, Elseworlds? And so long as the Legends don't get booted in favour of a more traditional team-up show, then I'm game for it.

Perhaps the biggest struggle the show has come up against so far is that it is only the Nora storyline that is pushing the overall arc. While it is nice to see Barry Allen being a father to a daughter he hasn't had yet, the voice over moments do edge on corny, even if they do a good job at highlighting Nora's personal growth and her evolution as a speedster. And it was nice to see that no matter what troubles Nora has already caused, she finds a way to get Cisco out of harms way.

As for the Cicada storyline, well, things aren't going quite so well. In the winning side, we see that is a human man, who has gone through a very big tragedy and is someone who doesn't really want to fight but believes he has too. On the down side though he doesn't cut such a fine figure as he did in the past episodes when we only saw him sparingly. The scenes between Cicada and Joe certainly lacked the tension and horror that they should have had. And the digital voice for the Arrowverse baddies is really becoming tired. Unless you've got someone amazing doing it, like Tony Todd as Zoom or Michael Dorn as Prometheus, then it doesn't really work. Chris Klein is both voicing and playing Cicada but he doesn't have the menacing quality in his voice that the character needs.

The Vibe/Cicada fight did little to spice this episode up either as we need a lot more information on why Cicada has it out for Vibe as badly as he does. Thankfully though, the death of Vibe that the title was alluding too turned out to just be something shocking and it didn't actually happen as it is hard to imagine anything being gained by killing Cisco. And the buildup was so hollow that the actual act of killing Cisco would have felt pointless anyway. I do hope that the 'death' of Vibe might actually work in the show's favour as I've never been sure what the series was supposed to accomplish by establishing Cisco as a metahuman in the first place. And as the end result was Cisco having to give up being Vibe and lying low for a while, then that isn't too much of a bad thing either.

Certainly the biggest development of this episode was the introduction of this season's new Harrison  Wells. The rotating versions of Harrison have been a fun little gag in the show's past but as the series enters its fifth year, it seems to feel a little redundant now. One wonders whether the show really needs a new Wells now, especially when it has trouble in juggling all its supporting characters anyway. And was there any point in introducing a new detective version of the character when Team Flash has a competent detective in their corner in the form of Ralph?

The biggest problem with this new Harrison Wells for me is that these cartoon versions of the character aren't the greatest of creations. Tom Cavanagh has already created three distinctive versions of the same character in the form of Dr. Wells, Harry and H.R. However, when the show introduced the other multiverse versions of the character, Cavanagh relied on stereotypes and funny accents to make the characters tolerable. It just doesn't have the same impact anymore. If this season's Harrison is going to add anything to the overall arc, it will be his relationship with Nora as so far, he's the only one to see through her deceptions.

What this episode did bring to it was a little more to Caitlin's hunt for her supposedly deceased father. I am enjoying this shift of focus for Caitlin, moving away from her Killer Frost alterego and instead focusing on her scientist side again. However, apart from her confrontation with her mother, the Caitlin/Ralph storyline didn't really seem to go anywhere. There seems to be a lot hinging on her Father's reveal and I'm not sure the storyline is there to do that just that.

While The Flash has picked up with this new season, it also makes it clear that the show has a long way to go before it reaches the same highs as Season One and Two. It also seems to still be struggling with its supporting cast with much of this episode still focusing on Barry, Iris and Nora, the guest cast was pushed aside again, even though the episode should have looked more at them instead. And while it was nice to Tom Cavanagh again and for me, he will always be a welcome presence on this show, this new Harrison Wells has a long way to go to measure up to his previous incarnations so far...