Doctor Who: The Plotters - Review 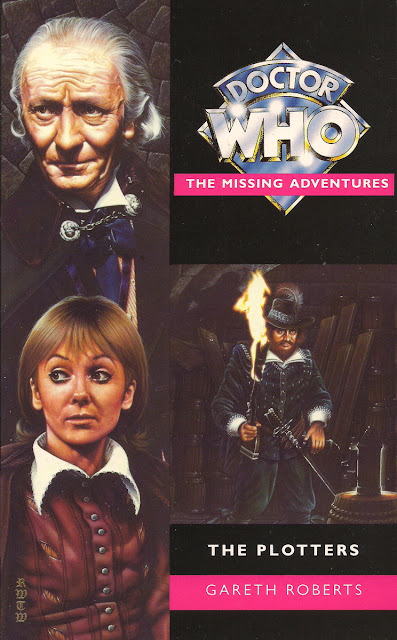 The Plotters is easily the literary counterpart of The Romans, a fundamental historical from the early Doctor Who era, with comedic elements added in to make the material lighter. I was disappointed to discover that, unlike The Romans which I find immensely amusing, The Plotters, written by Gareth Roberts - really irritated me.

Plot-wise - (if you pardon the pun!) - The Plotters is pretty straightforward and is a 'don't interfere with history', adventure. The Doctor, Ian, Barbara and Vikki arrive in London in 1605 on the eve of the Gunpowder Plot and they soon find themselves caught up in the events unravelling around them. Ian and Barbara get mixed up with Guy Fawkes while the Doctor and Vikki infiltrate the court of King James under the disguise of pilgrims from York Minister.

While this book is the epitome of formulaic, I suppose Roberts does shake things up a little bit by putting the characters into situations they have never been in before. Dressing Vikki up as a boy had been done before but having her being chased around by a randy King James is pushing the envelope further than David Whitaker would have taken The Crusaders. But as amusing as it is, it doesn't fit in with the overall feel of Hartnell historical. Dennis Spooner just about got away with this sort of carrying on with Nero and Barbara in The Romans, but only just, and only because these sorts of scenes were played with excellent performances.

The one area where this novel does 100% succeed is in its atmosphere and when you look past some of the strange skits it does feel like a series 2 adventure. And although I don't really enjoy Roberts' novels, those I have enjoyed are those which perfectly evoke the feel of the intended era. Here, the First Doctor is exactly as he was on screen - with him fluffing his lines in print! Ian and Barbara also get some impeccable adaptations too, with Robert's even taking the time to sow the seeds of their growing romance and it is a nice touch, especially given the next story in the continuity of the show was to be their swansong - The Chase.

In fact, with a bit of work, The Plotters would have probably made a decent four-part adventure on television and I would have warmed to it more had it been televised. But trying to slog my way through 300 pages of droll and dreary prose wasn't my idea of fun. And that was what The Plotters was supposed to be, fun...