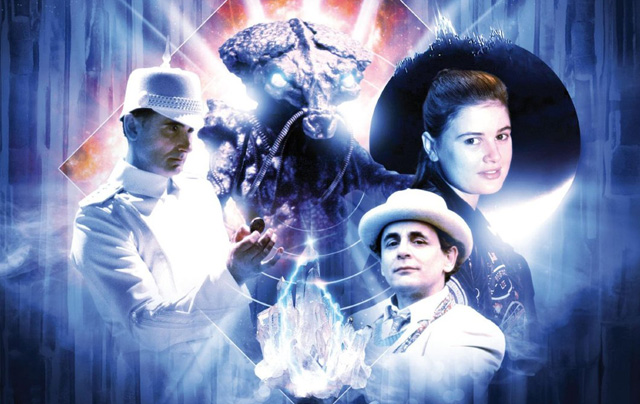 Dragonfire saw Sylvester McCoy's first season come to a rather dismal conclusion. However, it does introduce Ace to the series, one of the series best and most enduring companions of all time.

One of the most memorable moments of Dragonfire is that it wrote out the companion of Mel, played by Bonnie Langford. Unfortunately, like many and most of the companion departures, it is devoid of emotions, sudden and lacks any build-up. She doesn't even have a flimsy storyline like see's fallen in love, she just decides to leave. She gives up travelling through time and space with the Doctor for...Glitz?! That doesn't even make sense. Surely that would be like swapping a sports-car for a Robin Reliant. Many fans don't make a mumble though as Mel, although I quite liked her, didn't take to Mel on screen and where glad to see her go. But even I will admit, Ace was a much superior replacement.

Ace was one of the first companions I saw when Doctor Who came crashing into my life and watching the show now, I know she isn't as amazing as my ten-year-old memory remembers. She acts like a stroppy teenager and has obviously been written by someone who has never seen a teenager in their life. But they have a pretty good idea of what they sound like, which seems to include their usage of their own catchphrase. Alas, Sophie Aldred's acting here, though she gets much better later on, feels less BBC and more CBBC. But despite that, Ace really feels like a breath of fresh air, taken away from those screamers that had come before her. She is much more assertive than Peri or Mel ever where and she isn't afraid to give the baddies some lip, she is also handy with homemade explosives. She is also prone to beating up Daleks with a baseball bats and stopping Cybermen with a slingshot. She was also the first companion in a long time who had anything resembling a backstory and the jacket was pretty nifty too. 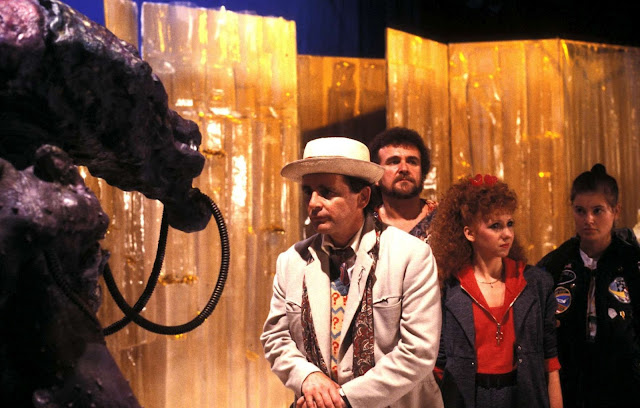 But like much of this particular series of the show, Dragonfire comes across dull and plodding, badly acted and rather cheap looking. And it is filled with villains who make little sense. If Kane was supposed to have been exiled for the rest of his life, why leave him with a way of escape? Why did Kane come up with some elaborate plot to get Glitz to find the treasure when he had guards with the firepower to do it for him? And why get the treasure anyway? Iceworld was a spaceport so why not commandeer any ship he wanted?

This is also another idea what it is doing with the Doctor. What does he actually do here? He doesn't find the Dragon, the Dragon finds him. He can't even save people on Iceworld save for some annoying little kid and her even more annoying mother. He doesn't even defeat the enemy. He tells Kane his planet has been destroyed but that was something Kane could have found out without the Doctor being around. It would have been better he stayed in the TARDIS this time around because he has absolutely no impact on the story whatsoever. Oh and Patricia Quinn is in it too...