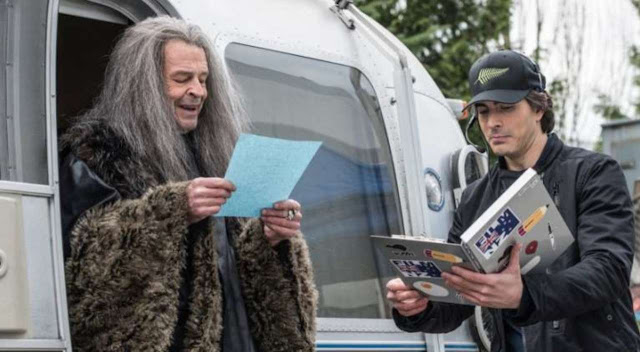 Guest Starring John Noble has to be one of the best episodes of Legends of Tomorrow so far. It is so funny but there are some really nice surprises along the way. There were some gloriously funny one-liners and the episode actually brought in one of the greatest actors around, John Noble, into the fold, away from his voice performance as Mallus, as himself, appearing in preparation for the original Lords of the Rings movie. And there was a very young Barack Obama running for his life through his college from a telepathic gorilla.

Before we get into the really funny stuff, we have the little matter of Amaya, who steals the jump-ship and travels back to Zambesi in 1992 to try and stop the decimation of her village. When the Legends quickly find out what she has done, Nate and Wally travel after her in a hopes of changing her mind. We all know that changing history is never a good thing and we know that doing so will set Mallus free.

Anachronism two concerns a gorilla called Grodd. He is on a mission to 'Make America Grodd Again!" something he says as he tries to choke a young Barack Obama to death on his college campus. It is good thing then that the Legends arrived just in time to save him otherwise the presidential history of the United States would look very different. But with Grodd being zapped to a much smaller size, the future is saved. They even use the immortal line from The Flash, "Run Barry. Run!" to great affect.

On the Mallus front, it turns out that the moment he gets free, it means he will kill Nora, literally taking her body apart as he uses her to enter our world. When Damien Darhk finds out he is none to pleased. But it is too late to take the deal he made with the devil back? With nothing he can do, Damien turns to the Legends for help and makes it clear he is willing to do whatever it takes to save his daughter. Sara seems to take the longest to allow him to help, only natural I suppose as he did kill her sister and has tried on numerous occasions to destroy the team.

The Legends plan to allow Mallus to use Nora to come through to their world and then use the six totems to destroy him. One little thing about their plan is that they would have to get Nora to turn sooner than Mallus planed. In a funny turn of events, que Mick watching Lord of the Rings and John Noble playing a Denethor. His voice is so perfect at being evil! Ray time travels back to the production of the film and gets Noble to read his little amendments to the script, he then takes a trip into Nora's ear and plays her the recording of his voice, causing her to change.

But in true Legends' fashion, the plan goes far from well. Amaya got her daughter to accept their family heritage and Nora had been captured. It was all going so well. Leave it to Damien Darhk to backstab them once more, it is like he can't help himself. But this time he doesn't do it because he is evil, he does it for his daughter, so it makes it a little better.

However, even Damien's betrayal allows Mallus to be set free and there was nothing the Legends or Damien could do to save Nora. I was cringing and groaning while he shed his skin and killed Nora because it looked so painful! And it is impossible not to feel sorry for Damien who had no chance to save his daughter. With Nora gone, Mallus freed from his time prison and Grodd destroying Amaya's village, how will the team save the day this time...