Timeless: Season 2 Episode 1: The War To End All Wars - Review 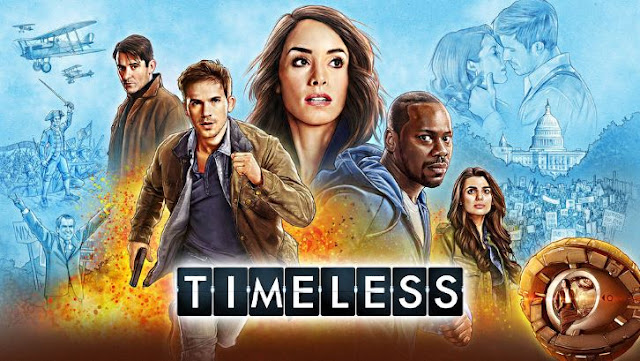 Following the conclusion to season one of Timeless, NBC announced their shocking decision to cancel the show. What followed was a surprising outcry from fans and casual viewers alike to bring the show back. For once, NBC listened and three days after the cancellation, the show was brought back, ready for season 2!

And the premier for the new season doesn't hold back. It rolls in intrigue, suspense and lots and lots of adventure. The episode picks up a little while after the conclusion of the last season and we see Mason Industries go up in a puff of smoke following an explosion at the hands of Rittenhouse and Lucy reeling from the revelation that her mother is alive and well and has been a member of Rittenhouse all along.

There is no denying that Wyatt and Lucy grew immensely close during season one and the slow burn of their relationship kept many on their toes through season one and the hiatus. With the show now back, it appears the creators aren't taking any chances and from the opening moments of this episode, it is obvious how much Wyatt cares about Lucy. He would never admit it but he is in love with Lucy, even Rufus noticed it! His determination to bring Lucy back and to keep her safe is so heartfelt and when she isn't around, Wyatt is really grumpy! He doesn't play around when it comes to getting her back.

But it turns out that Lucy has been with her mother this entire time, inducted into Rittenhouse as she is practically royalty to them. It is made perfectly clear that the only reason she is with them is because the only people she cares about could possibly be dead, at least that's what she believes and the fact that she is willing to kill herself to stop Rittenhouse speaks volumes. Things are already shaping up to be interesting as Lucy leaves her mother when the two gangs meet up on No Mans Land in the middle of WW1. Lucy's relationship with her mother is a really tricky one to understand but that only makes things all the more heart breaking. It might only be the premier but it will take a lot to get those two back to old terms.

The last season saw the team trying to stop Garcia Flynn from changing history so that Rittenhouse never existed. His motives were well intentioned, he just didn't go the right way about doing it. Now there mission has changed. Rittenhouse has deployed agents throughout history and the team has to find these sleepers before they are activated and hatch their evil plans. For Lucy though, the risks this season are even higher as she will pitted against her own mother. Last season, Lucy lost her sister when something went wrong on the Hindenburg mission and this could force her to loose the only family member she still has.

But it is was all worth it to see the gang reunite. The look on Wyatt's face when he hugged Lucy was brilliant and Lucy thought they were both dead, just imagine the grief she must have gone through. The question now though is what happened in the six weeks they were apart? Carol mentions that Lucy came a long way? What does she mean by that? And what about Wyatt and Rufus, what happened to them? Hopefully we will get answers in the form of flashbacks as the season goes on.

The end of the episode saw Flynn return, he is the only person who might have some answers for the group but he is in a maximum security prison and the only person he will talk to is Lucy, despite the fact he believes she betrayed him in the season one finale. He seems to know a few things and hopefully he will spill some interesting facts about the sleeper agents later down the line.

And we were SO close to that Wyatt/Lucy kiss. And then Jiya had to interrupt! It will be interesting to see where their relationship goes from here, especially if Lucy thinks she has lost everyone else, she will have Wyatt, that is if the writers don't do something horrible to them!

Overall, The War to End All Wars was a cracking way to open the new season, whether it was the huge set pieces like No Man's Land or the more character based moments, like Lucy being forced to kill a harmless soldier who was just too concerned about his friend or meeting Madame Curie, this episode was pure brilliance. It doesn't bother waiting around to do things either, it just dives straight in headfirst. I love time-travel shows and I can't wait to see what is to come...