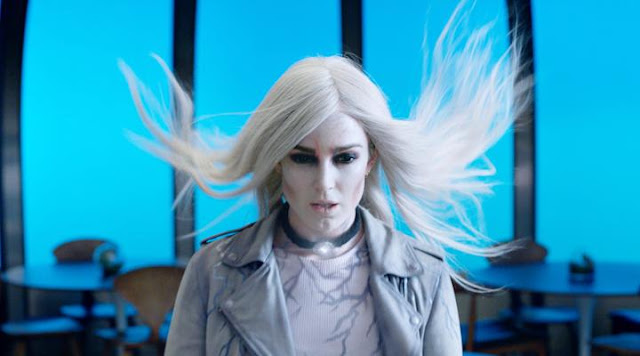 For Sara Lance, it has been a long road to get where she finally is on Legends of Tomorrow. But Necromancing the Stone brought all her hidden darkness flooding back in an explosive way. The fact that she manages to become a totem bearer isn't really a surprise, I should imagine everyone is going to get one at some point, but the surprise was that it was the Death Totem, the one that had been gracing Elvis' guitar in the previous episode. And I'm not going to lie, seeing Sara in silver hair and kicking ass was brilliant. But I think that the Death Totem needs to be kept under control in future, otherwise Sara will kill her whole team and that wouldn't be a very good idea!

What was interesting to see was how much the Legends struggled to survive against Sara when they were trapped on the Waverider. But I suppose we have to be honest, they did make some very rookie mistakes, especially when they kept on splitting up. Surely some of them knew in horror films that is never a good idea?! Even Gary, the time agent that follows Ava knew that. Gary is a character that had previously really annoyed me but he adds a lot of brilliantly comedic moments in this episode, particularly his analogies of Dungeons & Dragons, I game I've recently started playing with my friends. And seeing Gary beginning a new campaign at the end with Constantine joining his story, things can't get any better! With Gary having given me a new liking to his character I hope he sticks around a little bit more this season.

Necromancing the Stone saw not one Legend but two get to become Totem bearers. While Sara danced with death, it turns out the Fire Totem was made specifically for Mick. It was a good moment when he had to wear it, especially as he doesn't consider himself a hero, even though when push comes to shove, he always comes through for his team. For me, that is a hero and seeing the Totem take control of him and give him more power was an awesome moment too. Flinging fireballs at Sara was brilliant and I can't wait to see what else he can do now.

What was also nice to see was Ava getting a little bit more to do with her banter with Constantine. Seeing Ava get jealous over Constantine's connection with Sara was brilliant but it was their will to save Sara that got them through the day. Ava managed to reach Sara when others had tried and failed, and in the end, Sara denied the evil that Mallus and Nora were trying to offer her. Sara chooses life, love and pain and all that comes from this world.

But Sara keeps on sabotaging herself. After fighting off Mallus, she decides to end things with Ava because her darkness came back. She feels that she isn't good enough to have life, love and relationships but Ava is. But it is apparent that this was what Mallus wanted all along. And even though this seems to be the end for Sara and Ava, hopefully it won't be, though it might be a long road to recovery, especially as the show hasn't told us was the secret about her was that Rip had Gideon delete from her mainframe.

While Mallus may have lost this time, he is still getting stronger and stronger and now, with only a few more episodes left, it is only a matter of time before he is finally released from his prison. And there is no way that Legends of Tomorrow would build up to this and then not have him freed. It will be interesting to see if Sara does wield the Death Totem in the final battle and if Mallus tries to use her again. And just what the hell is going on with Ava...