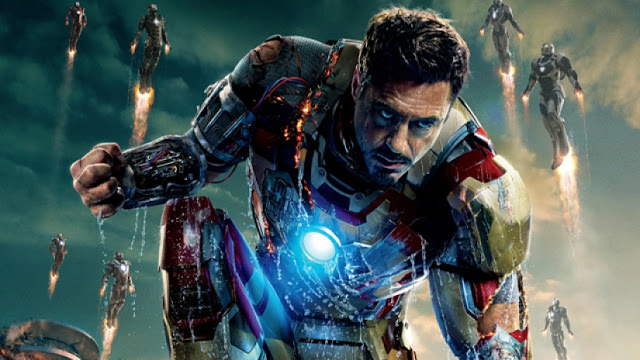 "When can we talk about the Avengers?" A preteen fanboy openly asks Tony Stark at one point during this movie. Of course the man inside the Iron Man suit would rather change the subject as the mere words "Avengers", "Aliens" and "Wormholes," send him into a panic attack. Stark is haunted by the events of The Avengers and really, so is this film. Iron Man 3 was the first Marvel film released after the blockbuster event that was The Avengers. That film, by Josh Whedon brought together the marvel movie characters that had been used in their Cinematic Universe up to that point that boosted interest in their solo outings. That is a sound strategy but one that would probably backfire. Watching Iron Man 3, it is a shame that Disney decided not to include any of the other characters outside of the Iron Man mythos and as a result we get this diverting, if sporadic sequel.

As with Jon Favreau's Iron Man 2, there is no shortage of supporting characters hovering around Stark. And although they share second billing's Gwyneth Paltrow and Don Cheadle as Pepper Pots and War Machine, fall slightly into the margins. Those who get much of the screen-time are the heavies, dragged into the narrative to test the mettle of the suave billionaire. The plot seems familiar to the fallen-hero story of The Dark Knight Rises as the minions of Ben Kingsley's Mandarin, blow Stark's mansion to smithereens. And then there is Guy Pearce's rat-bastard scientist villain and a group of self-igniting cronies who seem better suited to an X-Men movie.

The director, Shane Black, obviously new to the super-hero spectacle, Black manages to keep everything moving along at a breakneck speed. Perhaps the best thing that Black brought to the table though was his removal of Stark from the Iron Man suit. The best moments and scenes come from Stark having to use his intelligence and survival skills to get out of this sticky situation. In fact, Robert Downey Jr seems to relish his time out of the suit.

But less successful is the mandatory CGI action which came come across as a bit of a confused mess. Out of the two-hour runtime, the only really brilliant CGI scene is the destruction of Air Force One and the rescue of the passengers. In fact it is a brilliant example of what Iron Man 3 feels like, collecting the passengers feels like the movie trying to please everyone, giving us more characters than necessary and crowd pleasing moments.

So far, it is has only been Whedon who has managed to juggle both lots of characters and crowd pleasing moments and made it look easy. Sadly, his sequel was another two years away, with plenty of other solo characters outings to come...