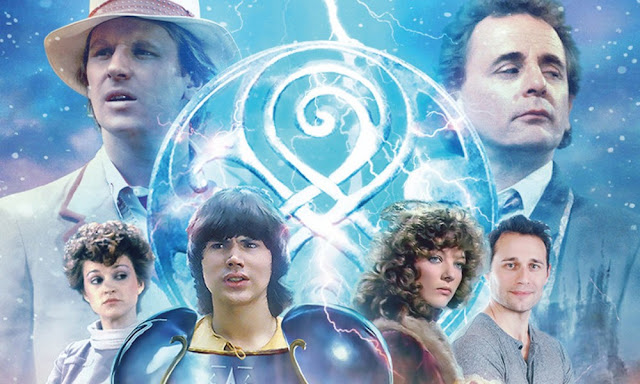 I guess there are two reasons why you would listen to an adaptation of a Doctor Who novel. Firstly, there is a nice feeling in hearing something you read being brought much closer to real life. Reading Love and War, I learnt how Bernice Summerfield met the Doctor but listening to it I learnt how Sylvester McCoy met Lisa Bowerman. The other reason these adaptations are handy is because it is a way of experiencing a novel that you will probably never read. Over the years Big Finish have amassed a huge back catalogue but it is still nothing compared to the Doctor Who novels. Lets be honest, there will be many you'll never read. These novel adaptations give you a way of enjoying those, especially if they are ones you want to read.

I'm much more likely to listen to Cold Fusion than read it and as a multi-Doctor story, it seems ripe for the audio treatment so we can hear the Fifth and Seventh Doctor's interact. And both the TARDIS crews used here haven't been utilized much before. Chris and Roz have only been heard in Damaged Goods and Original Sin and until Cold Fusion was released in 2016, the group of Tegan, Nyssa and Adric had only been heard in The Fifth Doctor Boxset.

Something that it was pleasing to see was that Big Finish seemed to understand that a story with seven main characters could never work on two-discs. So they turned this into a six-part, three-disc set, giving lots of time for things to develop. As such, Cold Fusion comes across as one of the best releases in the Novel Adaptations range. It never feels like it is rushing through something to get to something else. In fact, the very joy of Cold Fusion is its smaller moments, Tegan's outrage at Chris's faux-Australian accent, Nyssa's naïve interactions with the suave Chris, the way the Fifth Doctor's improvisation ruins one of the Seventh's best laid plans.

The big overall story is something that needs to be explained so that one can understand the little moments. There are ghosts and a TARDIS from the distant past is allowing aliens from another universe to invade ours. When the television show was cancelled in 1989 and the range of novels, Virgin New Adventures continued to make new stories, each book seemed to have something that raised the stakes to encompass the entire universe and while that didn't work with all of them, this was a story that it did. Most of the story is set on an alien planet and then the next minute BAM, things are going down and if you aren't paying attention then you might get lost. But for the most part, it is all just a backdrop for character interaction and jokes and in a story like this, that is enough for me because I like both of those things. Not all that interaction is laughter and frivolity, the way the Fifth and Seventh Doctors clash over how to handle things creates some brilliant drama.

Where the story is a little bogged down is the appearance of Patience, the supposed wife of the Doctor. Actress, Christine Kavanagh does a brilliant job but really Patience is there to be rescued and communicate telepathically with the Doctor from time-to-time. And the hints that they are married are so small that it is a shock, even if you have been listening intently, when the Fifth Doctor places his hand on her thigh. There is no sense of love and intimacy that should have been built up beforehand.

But this is still a brilliantly fun six-part adventure, featuring two great TARDIS teams and I left pleased that I got to experience Cold Fusion, even if it was in an audio format. It is also a good way for the range to bow-out as the Novel Adaptations were stopped due to poor sales. Hopefully this isn't the last we'll hear from Chris and Roz as I feel like we haven't been given the story that they deserve...