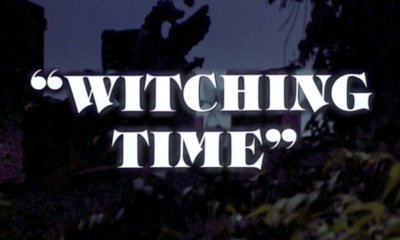 Recently re-released in an amazing Blu-Ray set, the 1980 series, Hammer House of Horror can now be enjoyed in glorious high-definition.

I used to watch these when they were repeated on Horror Channel back in the day, with my Dad, I was probably far too young to watch them and episodes like Children of the Full Moon and The Twin Faces of Evil, still have that fear factor for me. A few years after the repeats stopped, my Dad sadly passed away and with the Blu-Ray release having tempted me, I am going to delve back into the series and see if it is still as good as I remembered.

The series began with Witching Time, starring a memorable performance from Patricia Quinn, not long after Rocky Horror Picture Show was released in cinemas. And I was pleasantly surprised, it might not be the best hour of television on the planet but it is far from being the worst. Some of the performances are a little bit wobbly and there are a few plot holes or things left unsolved here and there but overall, it does hold up well. 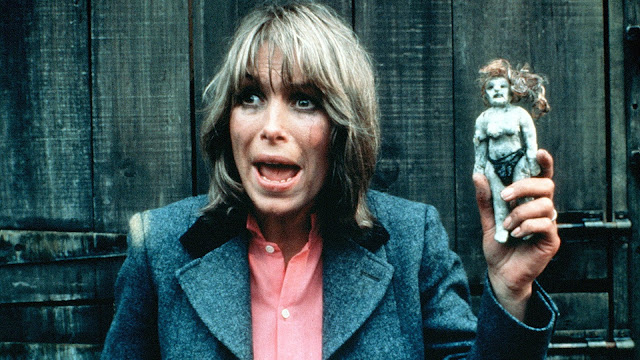 Mary, (Prunella Gee), uses Lucinda's own tricks against her!﻿

Hammer Horror decided to do a tried and true horror trope for their opening episode and set this story in the rural countryside in the fictional Woodstock Farm. Stressed musician, David Winter, played by Jon Finch lives their with his unfaithful wife, actress and model, Mary, played by Prunella Gee and is currently working on the soundtrack for a horror movie. One night, when his wife is away, a strange storm hits the area over his house and he discovers a woman hiding in his barn, who claims to have to come from 300 years previously. Lucinda Jessop, played by Patricia Quinn, claims to have been a witch who saved herself by harnessing the powers of her dark lord. Of course, she goes on to wreck havoc in the lives of the couple and a couple of rather unnecessary nude scenes later, a final showdown between Lucinda and Mary is about to take place.

Anthony Read, who penned the story and had a large role in the production of the series as a whole, kicks things off nicely with this story. It is clear that he knew a little something about how horror works, especially in setting the story in an isolated location where one character was always alone. While things like using a dark and stormy night might be a little 'old-hat' by today's standards, at the time, it was still relatively creepy. 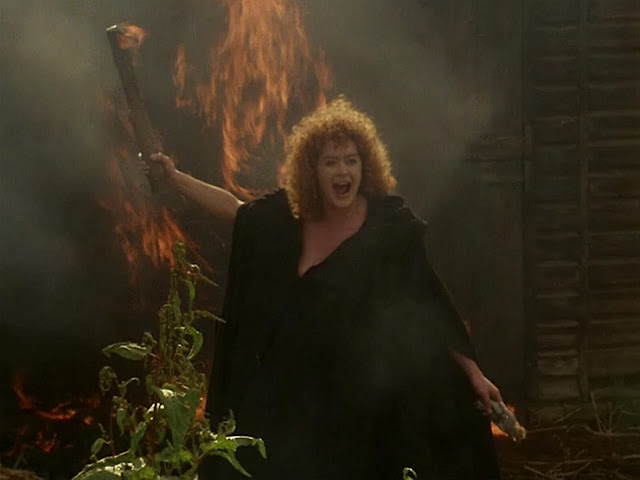 I can imagine to an eighties audience, this might have been near the knuckle and I think I'm right in saying that well know television-pest Mary Whitehouse had things to say about the series!

I stated above that the performances are a little off and they are, mainly from the two leads, Jon Finch and Prunella Gee. Even though they are supposed to be a couple who spent a lot of time apart and a couple who both know that Mary is having an affair, they never quite convince the viewer that they are married. Gee in particular, seems to have trouble in some scenes, sounding more like she is reading from a script rather than giving a natural performance. But she picks herself up once she becomes aware of Lucinda and finally gives an all out performance for the final showdown.

Patricia Quinn on the other hand, has no such problems. She just goes for it, hell for leather and gives us a very memorable performance. Even if the 1700s language is a little much sometimes and the nude scenes completely unneeded, she does a good job of convincing us she possesses magical powers. She is just wonderfully malicious and the role seemed to fit her like a glove.

Whether it was intentional or not, something I did like about Witching Time was that it never fully explains if David and Mary were going mad or if Lucinda was really there. Of course, living alone in an isolated location could and sometimes does, drive people mad. It is hardwired into the very being of every individual to be afraid of large open spaces, particularly at night when you can't see predators coming. And that is what the script manages to convey, Lucinda is the worst kind of predator.

Also surprising, despite the obviously unfortunate lack of budget, is how good the few special effects look. They did wonders with the decapitated bird whose wings keep on flapping even when its buried and director, Ian Scones manages to convey a real sense of unease with that little moment. Also, the burning pyre in the final minutes looks very good, so good in fact that you can almost feel the heat coming off it, so can the actors apparently as they move very gingerly around it!

So, did Witching Time stand up to how I remember it? Well, yes, it was and still is an entertaining little piece of television, despite some elements that weren't needed. It isn't the best piece of television ever made but this is far from the worst episode of Hammer House of Horror, in my opinon, that title goes to Growing Pains. Instead, Witching Time is quaint, unnerving, suspenseful and a little understated. But at the end of the day, that isn't always a bad thing...