Doctor Who - The Time Meddler - Review 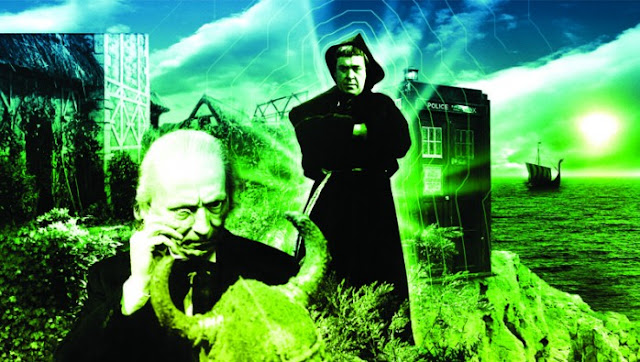 It is fair to say that season finales were not the same thing as they are now in 1965, but the appearance of one of the Doctor's own race must have been a brilliant surprise even back then. Long before the War Chief, the Master, Omega, The Rani and Rassilon, was the Meddling Monk and he was the first glimpse at someone else from the Doctor's past. And it is important to understand that the Monk doesn't come with any of the baggage the other characters did because he is best understood, not only as the inversion of the Doctor but of the First Doctor specifically. He wasn't a cosmic wizard who could feel the pulse of the universe but some sly, troublemaking old man who always had a trick up his sleeve.

Before the Monk all we knew about the Doctor's life on Gallifrey came from the Old Man in his box and his mysterious granddaughter Susan, who had left a few stories previously in The Dalek Invasion of Earth. Her place had been taken by a character, who on paper, was very similar: Vicki, a young orphan girl who had survived a spaceship crash and was rescued by the Doctor and his former companions, Coal Hill School teachers, Ian and Barbara. Once she was on board the stories had a similar feel to the ones previously where the stories were split between the four regulars, she had the grandfather/daughter relationship with the Doctor and the teacher/student dynamic with Ian and Barbara. There aren't many of Vicki's stories that are currently held by the BBC but she works a lot better as a companion than Susan mainly because of the material she has been given and because actress, Maureen O'Brien is a lot more bubbly and lively than Carole Ann-Ford ever was. And she works a lot better with the new incoming companion, Steven Taylor than Susan ever would have. 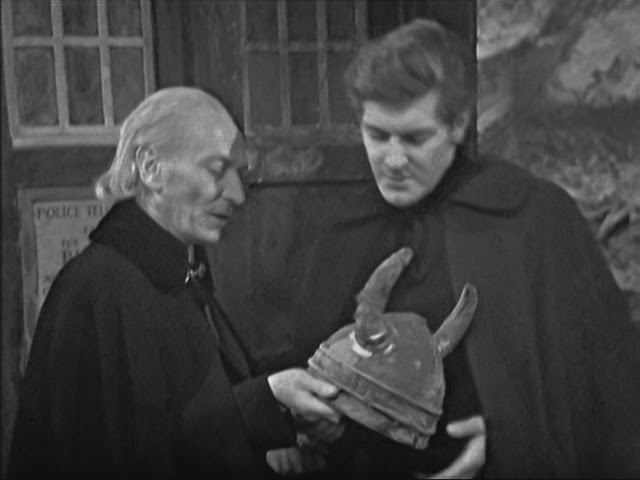 The Doctor, (William Hartnell), asks Stephen, (Peter Purves), if he really thinks this is a space-helmet for a cow!!﻿

Even if we look past the Monk and everything he implies, The Time Meddler was always going to be an important transitional story in the history of the show for a couple of reasons. One of those is the introduction of Peter Purves as the new companion Steven who, like Vicki, was a spaceship crash survivor from the future but was also a pilot and could fill in the action hero role. In fact, having a new guy in the TARDIS allowed the series to re-address the premise of the show through Steven's sceptical response that the ship could travel through time. Indeed, following on from An Unearthly Child, The Time Meddler marks a pretty good jumping on point for anyone who chooses to come into the show at this point. Whilst this could have made Steven quite annoying, instead he comes across as an intelligent person who doesn't just take things at face value. Actually, his skepticism comes in handy when they meet the Monk, especially when he and Vicki are confronted by a very fishy story from the Time Lord. Stephen manages to get the Monk to repeat his description of the Doctor, even though he claims he hasn't met him.

Behind the scenes, the show was about to loose its original producer, Verity Lambert and the script editor Dennis Spooner, who writes this tale and their leaving actually lead to the monster-of-the-week approach that still goes with Doctor Who to this day. The other changes were obvious, Ian and Barbara had left the show at the end of the previous story The Chase and this meant that it was only William Hartnell left from the show's debut. Of course, this meant that the only way to go on was through a slow and subtle shifting of things particularly the stories had to be less about the Doctor and his friends but the adventures that the Doctor and his friends went on. It isn't that the companions aren't important but they come and go, the Doctor is the only real constant. And the Doctor isn't constantly fighting for the dominance of the group. Steven was designed to do all the action-hero stuff that the First Doctor couldn't but he was also intended to be someone who was a supporting character. He might question time travel and irritate the Doctor but he knows that the old man is calling the shots. 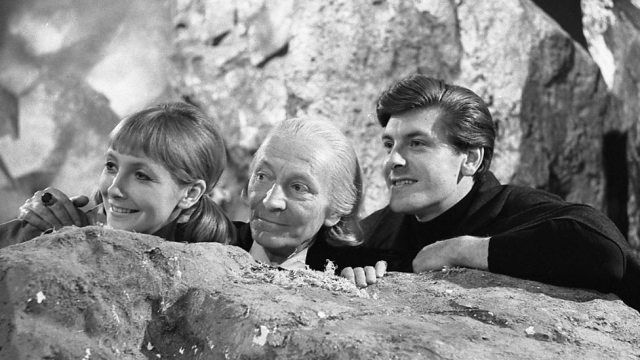 The Time Meddler kicked off another successful era of the show thanks to the brilliant chemistry between the main cast, Maureen O'Brien, William Hartnell and Peter Purves.﻿

This is also the first real time that the show dipped into a sub-genre of pseudo-historical. A story that is set in the past which deals less with the historic events unfolding around the gang but the science-fiction elements also going on. In this case we arrive shortly before the Norman invasion of Britain in 1066 from William the Conqueror. But that plot isn't front and centre, instead it is focused on the actions of the Monk, played with mischievous charm by Peter Butterworth.

This wasn't the first time the show had dealt with a time-travelling villain, in the previous story, the Daleks had developed a time-machine. In fact, the reveal that the Monk was a Time Lord was big enough to devote a whole cliff-hanger to it where Steven and Vicki enter a TARDIS, just like the Doctor's. We get a glimpse of these things from the very beginning of the story with the Monk looking down at the Doctor's TARDIS with a knowing look in his eyes. Then there is the appearance of technology that doesn't belong in 1066 like a wristwatch and an atomic canon. And later in the story, the Doctor and the Monk are put on the same visual level thanks to their wearing the same outfit.

Although his plans do involve a little murder, it is interesting that the Monk's plans are actually for creating a better future for the Earth. He is bumbling villain, who tumbles through history like the Doctor screwing around with it. While he likes to travel and see things, he does it with a more devious motive and despite having things like an atomic canon at his disposal, the Monk doesn't quite strike the mark as someone who would actually use it. As the title suggests, he is just a meddler which is pretty minor as crimes go. He isn't psychotic like the Master and he is put in the awkward position of having to look after an injured townsperson where as a villain like the Master or the Rani would have left him to die. And he is endearing as a schemer as he keeps his plans listed on a wall chart.

I would love to see the Monk make an appearance in the modern series, he is the kind of villain that the show could use, not really all that evil, just a persistent nuisance that could lead to some comic storylines. The Monk would eventually return to pester the First Doctor in The Daleks' Master Plan but he hasn't been seen on screen since. He has made appearances on audio with Big Finish but it is a shame we haven't seen him since. He is a big change to those universe-conquering types and would fit in brilliantly with the modern series. It would be brilliant to see him and the Doctor arguing over whose TARDIS is the best like they would do a Ford or Chevy...