Doctor Who: Gaze of the Medusa - Review 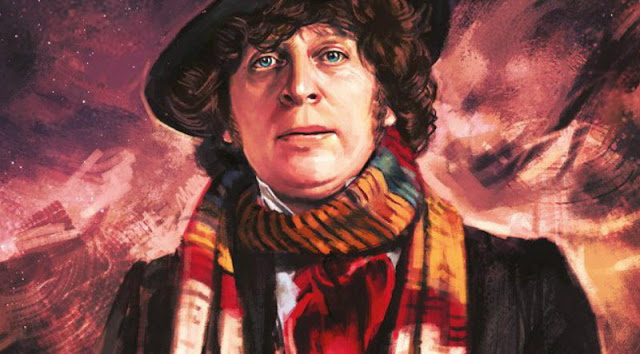 Forty years after her departure in The Hand of Fear, Sarah Jane is back with the Fourth Doctor, in a Titan Comics mini-series that sees them tackling the classic series for the first time. Indeed, the story seems to have been taken right out of 1976 and Gaze of the Medusa shows an incredible understanding of what made the original series work so well even down to creating some iconic cliff-hangers on a shoestring budget. This five issue series is a perfect adaptation of the early Tom Baker years and is loaded with enough depth and references to the modern series to make it feel like a living story as well as reminding us why Tom Baker is still the Doctor to so many fans.

Titan Comics couldn't have picked a stronger foot for their first delve into the classic series with the Fourth Doctor an Sarah Jane especially when you consider that not even Big Finish can bring her back properly, it is the Hinchcliffe era of the show that gives you all the bang for your buck when it comes to those early Baker and Sladen years. Sarah Jane proves to be a very strong lead against the villains and holds her own just as well as the Doctor does when tackling the baddies. I guess the writers were tapping into what made her so special in The Sarah Jane Adventures.

Victorian London is also a setting that Doctor Who does very well, whether it is in The Talons of Weng-Chiang or The Crimson Horror, the dark streets have always lent themselves well to this world. Gaze of the Medusa is no different playing well with the tropes that make Victorian London so mysterious. By combining Victorian London with Greek Mythology is an interesting premise that pays off well in its interesting imagery. I you never thought that you never needed to see a ten-foot-something cyclops in a cravat and with a neatly trimmed beard, you're wrong! With the warmth of lamp-light, the book is shrouded in shadows which really helps to sell the idea that dangers are lurking around each page.

I may keep on returning to the idea of how authentic this book feels but it really does. Gordon Rennie and Emma Beeby introduce the villains in the same way the producers would have done in 1976. Even the scope of the cyclops monsters' feels very 'in scope' and in many ways, this book trumps the classic series in terms of effects but manages to keep up the same level of ambition as the show had in 1976.

And the introduction of the side characters Odysseus and Athena James is entirely faithful to the way they would have been handled in 1976. With the story only just beginning, we view these characters from the side lines until they are propelled in the action. Their backstory is slowly explored through various flashbacks in these pages and it reveals a surprising amount of depth. Since this is set during the classic series of the show, we should know that these characters could just end up as cannon fodder but they are so well developed that whenever something does happen to them feels truly emotional. It reminds us what a far-cry these characters were like in the classic series compared to the modern series.

Even Tom Baker's energy seems to ooze from every inch of this book. It captures his spirit perfectly and his urge for humour and anarchy. There is even a moment where the Fourth Doctor addresses the elephant in this book and blatantly references the Weeping Angels.

Brian Williamson's artwork could progressively better as the book went on with early pages having Baker look unrealistic with his face and positions having been lifted directly from promotional images or scenes. By the time the later issues roll around, one feels Williamson had a better grasp on the character to give his own interpretation.

But this was Titan Comic's first foray into the classic era and one can forgive little missteps like this. Everyone involved managed to capture the spirit of this period and give us some really exciting cliff-hangers that make the television series and comic book series mesh perfectly. I still have some issues with how Titan pace their comics but that certainly isn't the case here, it really is stunning how well the company have produced this series. If you ever had any doubt about picking up a Fourth Doctor comic, then know that this book captures the tone of his early years and characters perfectly while reminding us why Baker absolutely owns the role...