Doctor Who: Dalek Empire: Invasion of the Daleks - Review 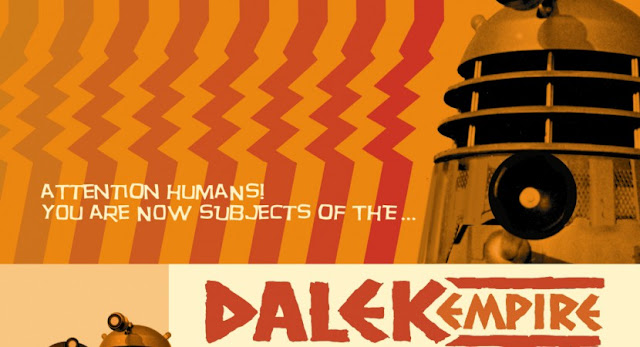 Dalek Empire came out from Big Finish a few years before the show came back in 2005 and introduced the Time War between two galactic superpowers. And indeed the war depicted in this series feels a lot more lopsided. The Daleks are evidently the more powerful and what is nice is that the rest of the universe doesn't really stand a chance.

I am completely the wrong target audience for Dalek Empire. The Cybermen have always been more intimidating to me. Of course, the Daleks have always been a popular villain with me but as I've gotten much older, they have become quite cute, slightly comical bumper cars. And because of this whenever I see a Dalek on a Big Finish cover, I go into it with some reservations.

But I do have a lot of respect for the voice actor and creator of this series, Nicholas Briggs and the Daleks have always been his babies. I'd heard a lot of talk that this series was actually quite good, so recently in a warehouse sale on the Big Finish series, I managed to pick up virtually all four series' for a £1 each, I gave it a go.

What did I think? So far, so good. I've only listened to Invasion of the Daleks at the moment which simply sets up the situation and the characters. The audio also does a good job of showing us how helpless and small the average person caught up in a conflict like this must feel, despite the fact that besides the Daleks, there are only four/five main characters.

Without spoiling too much for those who want to give this series a go, it shows us how the Daleks can be used to be scary. It goes back to the way they were originally intended and it liberally uses the old metaphor of the Daleks being the Nazis. Indeed, the human protagonists show us what it is like to part of a conquered population and in many respects, this is far scarier than being shot at or chased down endless corridors. And the Daleks here aren't all the same, Briggs gives them all some kind of personality and intelligence that allows them to use sly tactics to get what they want. There's a wily Dalek Supreme and even a jovial Dalek Emperor.

As I listen further, no doubt my suspicions that none of the human protagonists seem as simple and straightforward as they first appear. It is nice that each of them seem to have secrets and dark pasts, hints of which already start to leak out before the end of the first story...