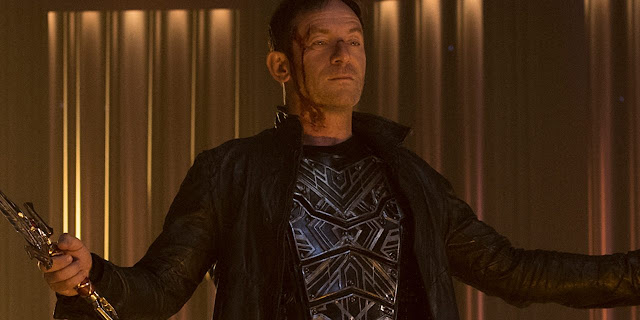 The Mirror Universe arc has produced some of the best episodes of Discovery's first season and to this point, What's Past is Prologue might be the season's best. Of course, we can debate all day long if this was actually something that should have come from the Star Trek universe but there is little doubt that this is one of the best bits of television so far in 2018.

I remember in my review for the episode, Context is for Kings, speculating on whether Lorca could actually end up being the villain for the season. And I was right! Even if he wasn't the villain for too long. I'd already figured out that Lorca would probably die, even if the idea that this dark character had actually come from the Mirror Universe hadn't occurred to me! Following the reveal concerning his character in the previous episode, there was little doubt that he couldn't actually carry on as a series regular, not without stretching credulity to the breaking point. But, I didn't think he would go out this quickly, only one episode after we find out he is actually evil. So Lorca dies. He is really dead, he was stabbed through the heart by the Emperor and then fell into a reactor just as it blew up, atomising him. No one is going to be able to walk that one off. It is a shame however that this might be the last we see of Jason Issacs in the series and that is a shame because he had such a presence on this series that his absence is going to be felt. 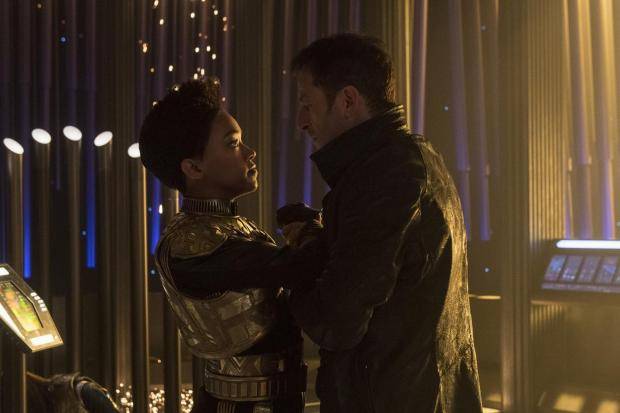 Burnham, (Sonequa Martin-Green) comes face to face with Lorca, (Jason Issacs), now that his real motives have been revealed.﻿

Without any further need to play nice, Lorca went full on crazy here but it is a little disappointing that Lorca went from being a very dynamic character to the archetype of every racist megalomaniac ever. The comparison to Trump was a little on the nose too. That comparison isn't entirely accurate because this is a megalomaniac who doesn't surround himself with other idiots. But then, he also has a really creepy thing for his daughter so the comparison isn't too far off.

With Lorca having joined the fate off all red-shirts, there is an empty captain's chair and I hope that it is Saru who gets to fill it. Not only does he prove himself a capable entity in a fight, he gave one of the best captain speeches ever given on Star Trek. Tilly wasn't the only one close to tears.

As great a speech as it was, it wouldn't have worked if Discovery had already done such great character work. While the bridge crew made up of Keyla, Joann, Airiam and Rhys might not be on screen as much as other characters, we know them and we like them and I hope that they get some deserved development in season 2. When Saru talks about them all being a great team, it works better with everyone involved rather than just Burnham, Stamets and Tilly. 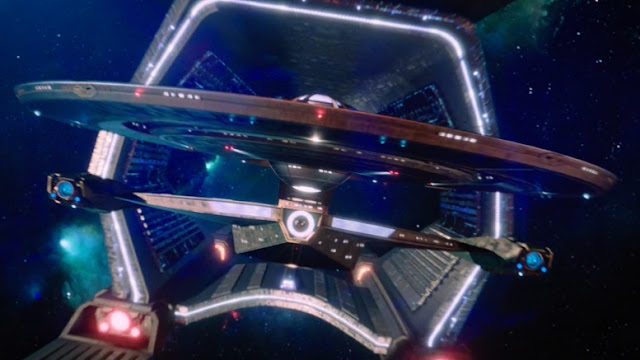 It wasn't just Michelle Yeoh who got kick ass in this episode, the ship actually got to do some too!﻿

At the end of the day though, was it right for Burnham to have saved the Emperor? I totally understand why she did it, but is this version of Georgiou really worth saving? This is a woman who ruled the Terran Empire with an iron fist for many years, crushed any and all resistance and eat roasted Kelpian! She might not have been as bad as Lorca but she still isn't a goodie. All they've done is trade one evil tyrant for another one. But what are the show's hopes for Georgiou going forward beyond some more bloody good fight scenes.

And that final fight was bloody brilliant. It only took the producers thirteen episodes to realise that they had Michelle Yeoh on their show! You certainly don't cast an action actor of her calibre and then not let her kick ass. And that way she kicked the knife away?! I nearly had a religious experience! It is highly unlikely that she will replace Lorca as the captain but hopefully she'll stick around, I want to see her beat every bad guy in the Star Trek to a quivering wreck...