Doctor Who: In The Blood - Review 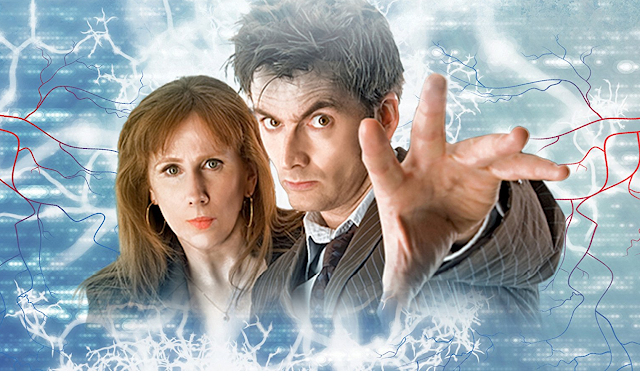 I loved the pairing of David Tennant and Catherine Tate as the Tenth Doctor and Donna Noble. So when I heard about this book, I was delighted to find that author, Jenny T. Colgan was bringing them back. Of course, the concept alone was enough to interest me into picking it up, using the internet as a weapon is still something to be done well on television in Doctor Who and after reading this novel, I think it is safe to say that Colgan has done it justice.

Now, it would be criminal for me to go too much into the plot for In The Blood as the shocking twists and turns are part of what makes this novel such a good read. But I will confess that it had been a while since I was that enthralled with the book I was reading at the time. Not having read Colgan's other Who novel, Dark Horizons, this for me, was my first foray into her little corner of the Doctor Who mythos and I wasn't disappointed. I know that Dark Horizons was very well received and many were worried that this novel wouldn't live up to its predecessor. When I finally get around to getting myself a copy of Dark Horizons, I will be worried that it won't reach the bar set by its successor!

The main relationship at the forefront of this book is obviously that of The Tenth Doctor and Donna Noble and Colgan makes it perfectly obvious where in their time-line this book set, sometime between Midnight and Turn Left. And what is particularly heart-wrenching is that this book is set during the height of their friendship, just before things take a dark turn in The Stolen Earth/Journey's End.

Colgan captures the bantering nature of the pair perfectly and one can tell that this book is written by a real Who fan. Sometimes stories can be hard to imagine having our main characters in, no matter the Doctor and companion pairing. But when I read In The Blood, I could clearly see David Tennant and Catherine Tate saying the lines. The established characters featured here don't end with the Tenth Doctor and Donna either, Donna's granddad Wilf and her mother Sylvia make appearances, though the latter to less of an extent.

And alongside the established characters, we also get some new faces, Fief, certainly one of the most interesting and thought provoking creations in the lore of the show and the reappearance of Gully, a giant octopus thing from Colgan's audio adventure, also featuring the Tenth Doctor and Donna, Time Reaver. I read In The Blood before I heard Time Reaver and was a little annoyed that I knew the outcome of that adventure before I had listened to it but I guess that its all timey whimey isn't it?! But one really needs to listen to the audio story before reading this one to get the most out of the story.

Colgan decides to shake the story up a number of times in this novel by having the Doctor and Donna globetrotting from London to South Korea to Brazil, without the use of the TARDIS. It is a very bold move. The Doctor without the TARDIS changes the whole scenario and presents new ones now that the Doctor doesn't have his box.

The shortness of the chapters is another thing to mention here. I know it is an odd thing to mention but each chapter averages out to five pages apiece, which means this book can be read a more leisurely pace and you aren't forced to commit an hour to completing a chapter and if you are like me with a 'one more chapter' mentality, you will find you have read most of the book within the first sitting!

Now, I have been purposefully vague about a lot of this book but that is because it is one of those which needs to be read to enjoy. In fact, In The Blood is more than a great Doctor Who novel or even just a novel, it is an interesting look at modern society and our dependence on our mobile phones, Facebook's and other social media. And while that might sound heavy handed for a book featuring an alien like the Doctor, it isn't. Colgan addresses the problems that come with an internet addiction, whether it is through being an internet troll or not and puts a brilliant science fiction twist on the proceedings.

I really can't remember the last time a book had my tears on it, whether it is from crying at the sad moments or crying with laughter at the funny bits. But In The Blood had me going from laughing to crying in the same chapter at times and it might just be one of the best Doctor Who novels, I have read and trust me, I have read a lot...