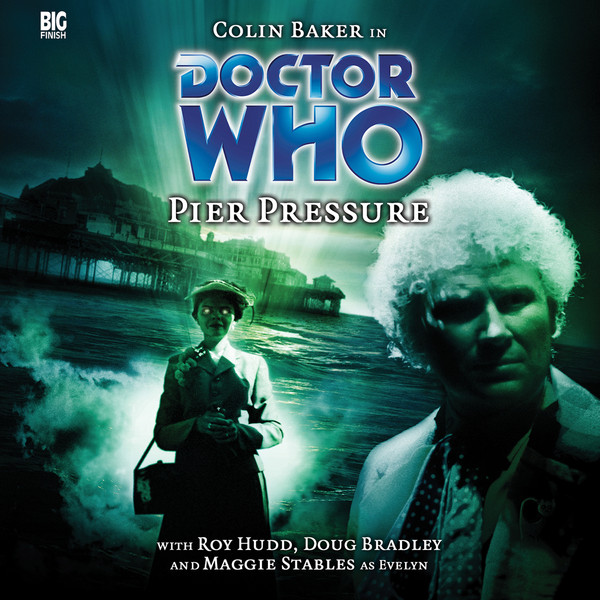 This is a Sixth Doctor which has more than a little in common with the 2004 adventure, Medicinal Purposes, which marked the debut of author, Robert Ross to the worlds of Big Finish. This follow-up stars Colin Baker as the Doctor and Maggie Stables as his companion, Evelyn. Likewise to Ross's other tale, this is a historical set in 1936 and deals with another real historical figure in the form of comedian Max Miller. And once more, this story features the pressence of a modern comedy master.

In this instance, that comedy master is Roy Hudd, best know for his comedic performances, here Hudd gets to show that he is a dab hand at straight acting and here he gets to play his own comedy hero. It makes one wonder if Maxxie was right right when he said there'll never be another?

With several horrific events befalling the cast of characters, the story takes delight in several ammusing moments. As Miller, Hudd unleashes a few double-entendres, especially when in the presence of actress, Maggie Stables. There are also a few subtle digs at some of the more unpopular things about the Sixth Doctor's television era, with the Doctor describing the eighties as a garish decade and the BBC as often unforgiving to their finest assets.

Listeners at the time were delighted that Thicker than Water proved not to be Maggie Stable's last outing as Evelyn. Even though cronologically speaking, that is her last story, one never got the impression that Evelyn wouldn't be back at some point, even though we now know she will survive all these adventures because she has too.

But the plot is very slow moving and the cliff-hangers are less than good. In fact, the first one isn't even a cliff-hanger really, while the third recycles things from the second. But nevertheless, this is an entertaining story and is worth peering at, if only to bask in the location and historical detail. But nowadays what this story does is remind us how great the late Maggie Stables was...