Doctor Who: The Missing Adventures - The Smugglers: Review

Following on from the end of the previous surviving serial, The War Machines, The Smugglers sees new companions Ben and Polly going on their first adventure with the Doctor. But this can only mean one thing, the First Doctor doesn't have a long time left.

Sadly, The Smugglers is still held as one of number of serials of Doctor Who which no longer exist thanks to the BBC burning a lot of their old tapes to make room for new ones. However, what we do have is a number of surviving clips thanks to the Australian censors who cut out almost all of the deaths.

The Smugglers sees the TARDIS bring the new crew to Cornwall in the 17th century where they all become embroiled in a smuggling ring. While Polly gets to spend the story being mistaken for a 'young-lad', the caretaker from Grange Hill, plays a knife wielding maniac called Cherub and the Doctor strikes up a deal with a stereotypically hook-handed pirate called Captain Pike, to find some treasure, only to lead him to his own arrest and doom. 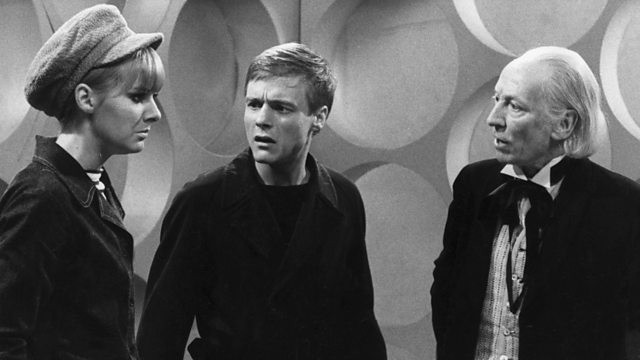 The Doctor, (William Hartnell), isn't happy about his TARDIS being invaded by Ben, (Michael Craze), and Polly,(Anneke Wills).﻿

As with The Savages, The Smugglers is a story where there isn't a lot to write about. Unlike The Savages, this is a story where the plot isn't complex and is pretty easy to follow. While the plot is solid, it is unsubstantial and lacks any real direction or substance. As such, there are only two plot threads with this tale. The Doctor and Captain Pike talk about where the treasure is hidden, while the Doctor ties to trick Pike into thinking he knows nothing about it. And then there is the smuggling with a crooked town inn-keeper and squire who accidentely get in over their heads with the pirates.

Now, one would belive that with a story titled, The Smugglers, the main focus of the story would be on the actual smuggling racket. But it doesn't. In fact the smuggling storyline doesn't factor into the story almost at all. Almost none of the main cast bother with it. William Hartnell's, First Doctor seems more interested in Avery's Gold, while Ben and Polly, who understandably take some time to get used to idea of time travel, spend four episodes finding out where the Doctor is and how to get back to the TARDIS. As a result, anyone coming into this story hoping to witness something about smuggling will be left feeling a little confused. 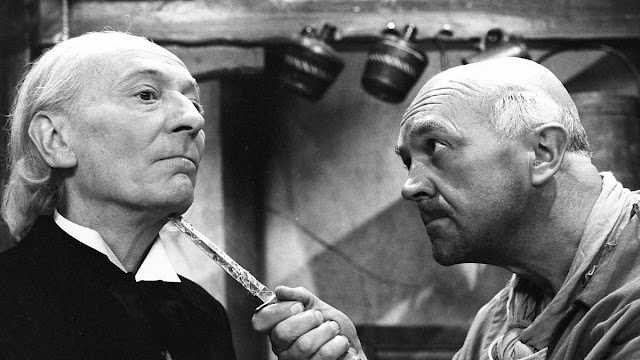 The Doctor finds himself under the knife with Cherub, (George A. Cooper).﻿

With the almost complete lack of a plot, the serial is lifted by its performances from its guest cast. To this day, you see some cast members who aren't sure how to play their characters in non-historical stories. But in the olden days, this never really seemed to be a problem with the historical ones. Much like The Gunfighters, the guest cast seem to have a blast playing the characters they have been given.

The likes of George A.Cooper and Michael Godfrey, Cherub and Pike, get to play their pirates in a 'Aaaaaaaargh me hearties'' kind of way. And Paul Whitsun-Jones takes the role of the authority figure with great effect.

And the regular cast are on fine form too. As usual in this time of his era, Hartnell took more of a backseat role to the story, leaving his companions to carry much of its weight. Ben is a character who never really got a chance. He only had four stories before Jamie came along and he never really got the time to shine that he deserved. But he gets a decent amount of the action in this story so that serves him well.

Anneke Wills as Polly does a brilliant job too. I really liked her dislike of rats. For some reason, that comment really makes her feel real and shows us that the writers were trying to make the new companions have more depth than those who had come before her.

One final note of praise for The Smugglers has to be the death of the character, Jamiaca. There is something that is just so grim about it. Especially for a sixties Doctor Who story. When Pike first goes off his head at Jamaica because of his muck up on the shore, you feel like Jamaica's grovelling to his captain has saved his life. But when Jamaica thinks he has gotten out of his jam, Pike turns around and stabs him with his hook. "Aye, it'll be a merry night. But not for thee." Pike tells him as he dies on the floor. Then we see Pike wiping the blood off his hook with his handkerchief.

Thankfully, this scene was considered far too violent by the Australian censors so it is one of the few clips that still survive. And I think it helps cement that while the story might have been lacking in anything resembling a plot, Pike was a credible threat. It might have been quite shocking for children watching at the time.

Had The Smugglers survived the BBC culling in the late sixties and throughout the seventies, I believe it would be a story that is considered average at best. The plot is far too thin but the whole thing is saved from falling completely flat by the powerful performances given from all involved. The surviving clips are probably a little decieving too, making the whole thing a lot more exciting than it actually is but they are also probably the only best bits in this tale. So it is good that they survive, but you'll no doubt end up dissapointed if you go into the audio reconstruction based on those clips.

Perhaps The Smugglers should be best enjoyed with those few clips on the Lost in Time boxset. Maybe that is the best way to enjoy The Smugglers fully...