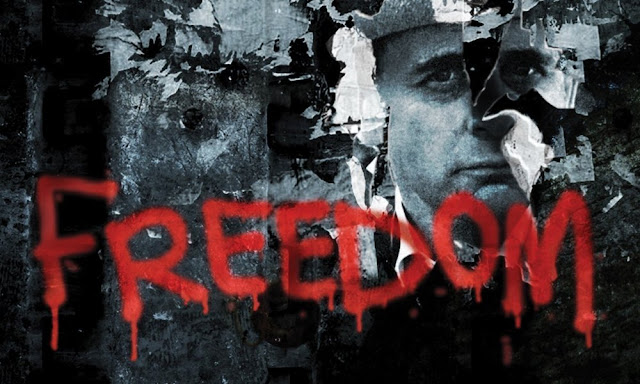 Live 34 is an extremely rare experiment in the history of Big Finish. It came about following a open call for scripts and it doesn't rely on an alien menace, time shifts, battles, mad scientists or an historical event. The main characters of the Seventh Doctor, Ace and Hex spend much of the story offstage and the entirety of the tale is told through a series of news reports on a radio programme.

But something else to take away from Live 34 is that it is one of the most terrifying Big Finish stories you'll ever hear.

Part of my reaction to this story was that I am old enough to remember some of the most shocking world events in the last few decades. Live 34 particularly evokes memories of America in the wake of 9/11 when you listen. This parallel is hammered home when one of the characters says your either with us or against us, and all those people who speak out against immigrants when, to them, they are to blame for everything that goes wrong. And that is what makes this story so frightening, it is an entirely plausable storyline. This could happen anywhere or anywhen. And none of us can get away by hiding behind the sofa.

We join the story with News Radio Live 34 broadcasting coverage following a series of bombings through the several weeks they occur. Although most of these have taken place in offices after working hours, the security forces insist that there have been casualties, even though no bodies or names have been released. The Freedom and Democracy Party, the group opposed to Premier Jaeger's five years in office, deny responsibility.

The first set of coverage ends with Charlotte Singh interviewing the newest head of the mentioned party - the mysterious Doctor. He has stepped in after the sudden and suspicious death of her predessesor. While they are talking, an explosion tears a building away from behind them and with hordes of witnesses, there is no question of a body count. The Doctor has a message to give about not being responsible but this is hard to swallow when we can hear the cries of those trapped inside.

Someone else denouncing the bombings is the strange Rebel Queen. She is interviewed by Ryan Wareing, Although she cheerfully admits to blowing up empty buildings to make a point, she denies any attempt to hurt people, something she hopes the radio broadcast will get across. The rot of the colony goes a lot further than just the political situation though according to her. But no one will know how much further until the government enforced embargo on information is lifted. She hopes to find the proof in the rubble of the latest explosion.

But has Wareing fallen for a sob story and a pretty face? Is all this just propaganda to topple the current government as Premier Jaegar keeps saying? What really is happening on Colony 34 and who is responsible? We only have the newsreporters to tell us and we can only hope that they are telling us the truth...