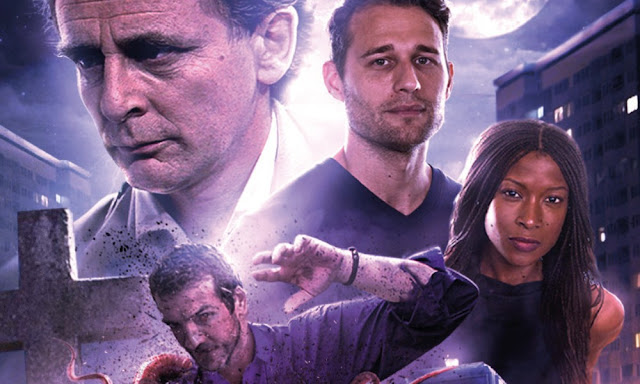 I like the work of Russel T. Davies. Not just his Doctor Who work but his work on other shows and I certainly miss his unique and brilliant take on the show, bringing back into homes across the world in 2005.

I keenly awaited the adaptation of Damaged Goods when it was first announced as it was Davies' only venture into the world of Doctor Who prose. Sadly, I haven't read the original novel but what surprised me when listening to it, was how different it was to his take on the series. This certainly wasn't written by the Davies who wrote Aliens in London/World War Three, but the Davies who wrote Queer as Folk and The Second Coming among others. This isn't his work with a big broad canvas, but a version of Doctor Who that comes straight into our very homes, about ordinary people with awful but ordinary problems.

What really makes Damaged Goods work is how grounded it is. The Doctor gives us a wonderful speech about how can just swan into command centres but a housing estate is like hundreds of fortresses because he has no excuse in entering people's homes. Every character we are introduced too feels completely real in the best Davies tradition. All of them come together in the best Davies tradition and between the original material, the adaptation from Jonathan Morris and the acting, there is nothing that is really terrible. Michelle Collins as the mother Winnie had to make a terrible choice one Christmas Eve, while Daniel Brocklbank's, David Daniels, is a man trying to find love in a world that makes it difficult too. Even Damien Lynch as Mr. Thomas turns out to be not a crude thug but a well-meaning and helpful guy.

Highlights for me include Denise Black and Eva Jericho and Georgia Fuller as Bev Tyler. Black plays a woman who has a sick son who is dying from a devastating condition and who acts as if she knows what is best for him. In best Russell T. Davies fashion, she does terrible things to attempt to help him, things that even though you understand the emotions behind them, your still completely repulsed by them. This makes for a good couple of scenes, ones that make you recoil because of how emotionaly harsh they are, even though there are Doctor Who audio stories which have featured more gruesome stuff in. Georgia Fuller is the emotional heart of this piece, her narration links together some of the big moments and her interactions between herself and Sylvester McCoy provide the grounding for the piece throughout. It humanises one of the most cosmic of incarnations for the Doctor.

All the regular cast are on top form too. For Sylvester McCoy the question of his performance remains on what the quality of the material is he is given. The difference between him in The Highest Science and here is staggering. This is the Seventh Doctor at his best, his mind focused on bigger things but still has the time to deal with the emotional and local problems as he alternates between serious and jovial. Yasmin Bannerman and Travis Oliver feature for the first time as the companions, Roz and Chris. I have only read one novel with them in, Shakedown, and from what I can remember of them in that novel, the pair manage to nail the characters. Most importantly, despite their limited roles, they really pop out, feeling like fully formed characters in a way that some Big Finish companions don't.

Of course, much of this plays success is down to the writing from Davies but it would be bad of me not to mention Jonathan Morris on adapatation duty. From the extras and interviews, it is clear he was obviously very thoughtful about translating this novel into the new format. And his attention to detail, making it feel like something Davies would have done in the modern series, really helps give it a 'new series' vibe.

Damaged Goods is simply brilliant and is a story that I found difficult to find any faults with. I had been slightly skeptical of Big Finish releasing this novel adaptations but this is Doctor Who at its very, very, best with the real colliding with the unreal and getting some devestating results...