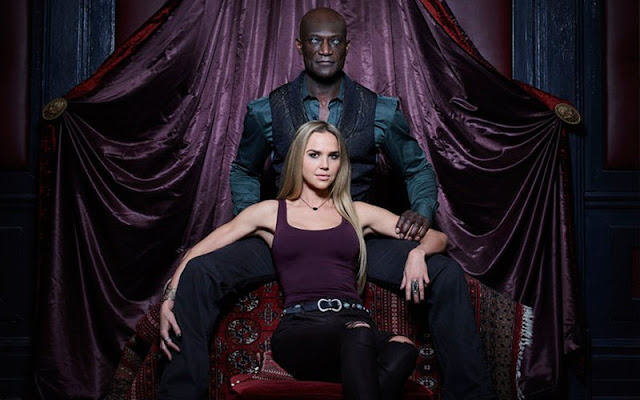 The Last Temptation of Midnight feels like the tipping point for the series and was a vast improvement on the previous episodes' angel-induced mess.

The villain of this story was an emissary, someone with no face who cut off other people's to give himself a disguise. This is something that we haven't even seen in Supernatural and was perhaps the first indication that this series is actually made by the same people as True Blood. We follow him on his journey to Midnight, taking people's faces, with the goal of starting the eventual apocalypse. Of couse, he doesn't actually arrive until the end of the episode, where he has managed to pick Manfred up along the way. He was quite creepy, even if it were completely obvious it was a man with a stocking put over his head.

With Manfred going away, the villagers are starting to loose their minds and the veil continues to thin. Fiji is starting to get sick and tired of the demon who is after her, Olivia and Lem have some serious relationship problems, with Olivia's comments that she doesn't want to be like Lem and her eventual having to leave him and Lem's growing hunger. Then we have the vegetarian Reverend who is hungry for steaks and meat and the demon whispering dark thoughts into the heads of everyone sad in Midnight, trying to get them to kill themselves, including Creek.

While Manfred is off on his soul-searching drive through the desert, we see some good flashbacks of him and his grandmother when they were both a lot younger. And when he realises his true purpose is to save Midnight, the action of the episode shifts to Olivia and Lem. From our first meeting of the human assassin and the vampire duo, there was a hint that there would be some issues between them, especially given how Olivia has some trust issues and the looming questions of whether or not the human in the relationship will decide to become immortal.

It was nice to see things to come ahead between the pair, especially when we see Olivia has prepared for the man she claims to love going rogue. She fights as best as she can but even she realises that if Lem decides to let loose, there will be very little to stop him. Lem is a character who is normally so calm and collected, easily the best character out of the series but to see him cut loose like this, gives him a fear factor and people are right to be scared of him.

But on a happier note, things wrap up with Manfred returning to Midnight and to Creek. But with the next episode bringing a sandstorm and a ressurected demon to the town, it certainly seems like the poor town of Midnight just can't catch a break. I for one hope it doesn't because the show, which was already good, is just starting to get brilliant...