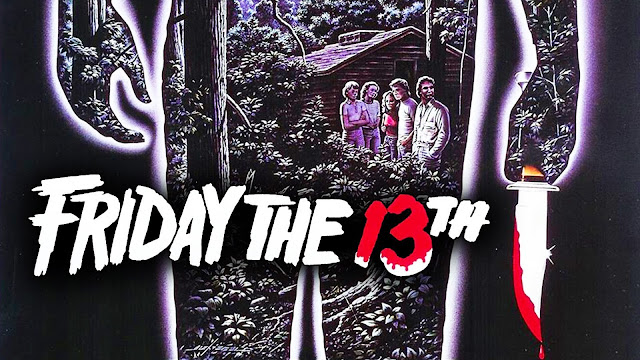 For all the lore that is steeped around the Friday the 13th movie franchise, though coming to it new, like I was a little while ago will be in for a massive surprise. Many of the series' long running staples are toned right down or aren't even in it, the gore is surprisingly tame, there is a little sex and little to nothing in terms of nudity. Everything people have told you about the movie is wrong, well, with the first installment at least. There isn't even Jason, the killer from the franchise. Only the core concept of the movie remains the same as people tell you, a group of kids go into the woods, have sex and then get killed off, one-by-one, by a murdering lunatic.

It is generally accepted amongst movie and horror fans that the slasher genre began in 1978 with Halloween. Cases could be made for other movies but John Carpenters film distilled the formula and established the template for all those to follow. While Halloween might have widened the road made by Psycho and Black Christmas, it was Friday the 13th that paved that road, even though the film seems to self-awarely and even the creators admited, their goal was to rip off Halloween. However, what director Sean S. Cunningham and writer Victor Millar took away from Halloween wasn't the slow building feeling of tension and fear but the idea that women were having sex and then being stabbed by some masked killer. Friday the 13th is neither tense or frightening, although admittedly it is a little creepy, thanks to the lack of budget and location, the characters are worse than paper thin and the story exists for no other reason than to cause a little carnage.

The movie strands six camp counselors, Alice (Adrienne King), Marcie (Jeannine Taylor), Brenda (Laura Bartram), Jack (Kevin Bacon), Bill (Harry Crosby) and Ned (Mark Nelson) - at Camp Crystal Lake, a summer retreat in a wooded area of the American countryside. The new owner, Steve Christie (Peter Brouwer), is determined to get the campsite up and running again but as the long afternoon soon decends into the dark of night, the group of college-kids start to do what a group of college-kids do. Jack and Marcie sneak off into a cabin to get to know each other a little better, Alice, Brenda and Bill play a game of strip-Monopoly and Ned goes on a walk. All the time this is going on, a killer is staking the site, picking the counselors off slowly and the survivors don't become aware of the dangers until it is far too late.

Jason, the character who become the flagship of this franchise from Part II onwards, is largely absent from this movie. He appears in a little dream sequence but apart from that, he isn't relevent to the events of this picture. His supposed drowning in 1957 is only relevent because it gives the killer some weak motive behind what they are going out and doing. And sadly, the unmasking of the villain isn't just anticlimatic but laughably absurd.

In fact, this movie can be divided up into two segments. The first seventy-five minutes or so is a rambling chronicle of what these kids are doing when they are left alone in the woods. And it is a little creepy but not consistantly so and the dialogue is just awful. This tedium is occasionally broken by a murder but these are only brief, bloody interludes. And those bloody interludes are more than a little anemic. Following on from the surprisingly nearly bloodless Halloween, this movie isn't the gore fest it is reported to be.

It is in the final twenty minutes that all the action actually happens and there is a hell-of-a-lot of running around. The killer gets revealed, the bodies get discovered and Adrienne King proves to us that she can let loose with one killer scream. And that climax is so campy and moranic that it can be enjoyed because it is so bad it is actually good. The acting is excrutiatingly bad and Cunningman proves that whatever the hell it was he learnt from Halloween, tension building certainly wasn't one of them!

Friday th 13th wasn't Kevin Bacon's first rodeo but it was pretty close. And he isn't around for more than a cup of coffee either. He is in it just long enough to have sex and then gets killed. But he is the only actor in this movie to go on and have a brilliant career. However, unlike Jamie Lee Curtis, he didn't have to claw his way out of the 'scream queen' genre to prove what he had. Of course, his fellows didn't have the same levels of success but from observing the qualities of their performances, it isn't hard to understand why.

Perhaps the best thing about this movie is it's score. Harry Manfredini deserves credit for upping the tension because he keeps things simple. There is more than a few hints of Bernard Herrman's score for Psycho but not so much that it could be called a cheap copy. The music only plays when the killer is around, so it is a good cue that something is going to happen. While it isn't as good as Halloween, it is nevertheless the best thing about this movie.

As a movie as a whole, Friday the 13th is unremarkable and unmemorable as it comes across as an amateurish production with no real value. The same words couldn't be used for its intial release in 1980 and if Halloween is the father of slasher films, then this one is the mother and brother of the genre. When these films took in so much money at the box-office, that the movies were soon flooded with similar movies and copycats. At the end of the day, the curse of Camp Crystal Lake wasn't the deaths of innocent campers but the dregs of the slasher genre that would soon overrun the box offices...