Doctor Who: The Algebra of Ice - Review 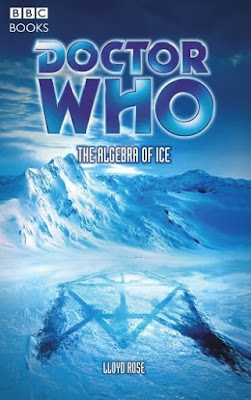 For its most part, The Algebra of Ice is one of the most outstanding Doctor Who novels out there. It is a fairly quiet, character piece, which reads more like a play than it does a novel because of the way author, Lloyd Rose manages to give us insights into the character's minds as well as how they interact with the events going on around them.

The opening part of the book is a little deceptive though, it is just a glut of continuity references shoehorned into the proceedings which lead me to believe that this was going to be a Craig Hinton affair. Rose tries to explain the misprint of the I.M. Foreman gates seen in Remembrance of the Daleks and drags the Brigadier out of retirement again, for just a number of uneventful scenes. But the further you read the novel, you realise that these aren't just flourishes from Lloyd, but a look at the darker side of the Seventh Doctor and what better to do this than him looking back at his destruction of Skaro, to see the reaction of his old friend?

It is also striking how Lloyd broaches this subject matter. This Seventh Doctor has the clown exterior of the twenty-fourth series with the dark-fire he inhabited during the New Adventures novels. Scenes where the Doctor leaves Unwin to die are wonderfully written, you can almost sees the cogs turning in the Time Lord's mind, see his realisation of the death and the guilt that it brings. And yet, we know he would do it all again if he had too.

And for a book that does the Doctor such justice, it doesn't leave Ace in the background either. In this novel she is leaving the adolescent girl she was in the television series behind and becoming the more brutal and regimented young woman she became in the New Adventures range of books. And it is through her heart-breaking relationship with Ethan Amberglass that we can see how the changes were coming about.

For his part, Ethan Amberglass is a really interesting character and I found the young mathematician surprising me on more than one occasion. Ethan is however outshined but the characterisation of Molecross, a conspiracy theory internet nut who has a fascination with the Doctor and Ace. Together with the two regulars, they help to make The Algebra of Ice the claustrophobic little book that it is. And the author's use of the Doctor's strange little house in Allen Road is a stroke of genius too.

But there is a lot more to this book than just its tight ensemble of characters, Rose's particular way of telling this story helps the tale to stand out amongst fifty-years worth of television adventures, books, audiobooks and comic book tales. The fairly abstract idea behind the story is really interesting and the villain, a man called Brett is really unlike any character ever seen on the show. His nihilistic rant at the Doctor puts his madness on par with people like Davros and the Master. In fact, he makes them look sane!

However, at the end of the day, The Algebra of Ice isn't going to be for everyone. It isn't action packed but it is evocative and indulgent but for me, this is a triumph.