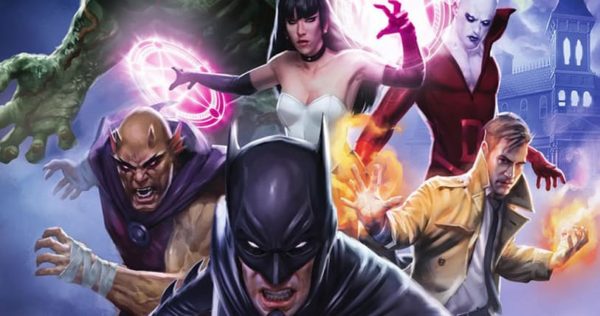 Justice League Dark sees the creepier and crawlier heroes of the DC Universe come out to play in this animated effort from DC Entertainment and is a stark departure to what most viewers had come to expect. Instead of featuring more conventional heroes, this movie uses characters that might be considered villains if people didn't know any better. And exploring the darker depths of these relatively unknown characters really does make for a captivating and thrilling story.

What helps this movie to stand out is that it isn't a direct adaptation of the Justice League Dark comic books and it instead borrows characters and concepts. With a magical threat which the normal Justice League isn't equipped to treat, Batman is forced to join forces with supernatural expert, John Constantine and stage magician, who actually does real magic, Zatanna, to round up a group of heroes suitable for dealing with the new threat. Constantine comments that the tights and capes crew isn't capable of dealing with this threat and thus, the new Justice League Dark team is born.

Joining Batman, Zatanna and Constantine is Deadman, an acrobat who was killed in the middle of his act, Jason Blood who seems to hulk-out at a moments notice into Etrigan and Swamp Thing, a being who controls all plant life on the planet. And it is in learning how each of these characters got their abilities that makes this movie such a big win. Justice League Dark plays out like a horror anthology with each story tied together by an overriding threat.

But when using the word horror to describe this movie should be done loosely, there are a few unsettling and disturbing moments but the movie is far from spine tingling, hair-raising or even scary. And there aren't even any attempts at any jump scares unless you count Batman shouting "Boo", to a ghost in a well done moment. But then the film never tries to be a horror movie, it seems more content to show its audience some strange visuals rather than dabbling in elements of the occult as the thriller attempts to ramp up the action.

The action feels like a breath of fresh air when compared to other animated movies of this kind. There isn't any dog-piling so everyone can have a punch at Darkseid. The final battle with Felix Faust is full of flashes and spells like some kind of wizard shoot-out.

As with all the animated DC movies, the new cast of characters gives us another delight, a new cast. Nicolas Turturro uses his deep New York accent to earn plenty of belly laughs as Deadman, Ray Chase sounds like he is having the time of life switching between Jason Blood and Etrigan, Camilla Luddington has a strong presence as Zatanna, while Matt Ryan continues to prove that he is the definitive John Constantine in both live action and animation.

Despite Batman's heavy presence in the advertisement for this movie, this is most certainly Constantine's movie with the fast-talking wizard propelling the plot forward, doing the coolest stuff and serving as the real emotional core of the whole film's experience. In fact, Batman is only present for so much of this movie because he is just a rich dude in a cape and he has to sit out much of the magical stuff and just throw Batarang's to bring his new teammates some time in different situations.

Actually Batman seems completely out of place, despite his distaste for anything supernatural. At the beginning Wonder Woman lists the supernatural threats that the Justice League has faced and Batman turns his nose up because he only believes in what can be explained by science.

Batman should have actually stepped aside and let Wonder Woman take the leadership role of this new team, she does have enchanted bracelets, a lasso that makes you tell the truth, the strength of Hercules and the gift of flight. Oh and she was a lump of clay, willed into creation by the very gods themselves. So, not only would she have fit more easily into the world of the occult and the supernatural a lot more easily, she would have the tools and skills to fight effectively. However, the film does have a few imperfections.

All the vocal performances are spot on except for Enrico Colantoni's Faust, who does a extremely corny and very shrill voice, as if no one told him that superhero movies aren't that camp anymore.

And despite her strong female presence, Zatanna gets outshined by another female character who turns up and is substantially different from her portrayal in the comics. This character has such an array of abilities and rich history that it almost hurts to see her turned into something less. Sure, characters should be changed to fit into new adaptations but not to extent that she is here. And no matter how good the DC animated movies are, they still lack the abilities to create a really interesting female character. But even accounting for this, Justice League Dark is still a great time and a welcome new flavour to the range of animated movies that DC currently has on offer...