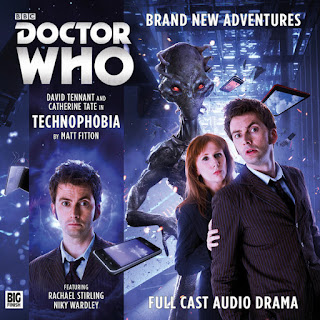 I'm sure that everyone has a little fear of technology. From our phones to tablets and from smart watches to new Virtual Reality simulators, the human condition breeds trepidation when it comes to anything new. Will our technologies be used to spy on us? Will they cause us all harm in some way? We certainly live in a golden age in terms of technological advancement and Technophobia is one of the best examples of Doctor Who showing us our fears not only established but confirmed as well.

Technophobia sees the Tenth Doctor and Donna returning to London in 2011 and getting caught up in strange goings on at the Technology museum. They find that things are turning on visitors while causing terror in others. Some can't remember how to use electronic devices. The question is, are these strange occurrences psychological or is there something more sinister at work?

This is the world of Doctor Who so of course, something more sinister is at work. A new alien race called the Koggnossenti appear towards the end of the tale and while they have a catchphrase which might play out well in playgrounds, they are the real weak point of this story. Their only plan is global domination and given the time they get to speak, they don't create the same kind of dramatic impact as their build up would have you believe. But that is okay in the long run as their scheme allows the listener to enjoy hearing the Doctor and Donna trying to stop them. The journey to the end is brilliant but when it reaches its conclusion, it falls a little flat. But it is a solid falling flat, with some nice, 'I'm here to save the day', acting from David Tennant which will no doubt have those who remember him from his era, squealing with delight.

The bulk of the story is incredibly fun, with the Doctor and Donna's back and fourth banter sparkling as bright as it ever did. The second the Doctor appears the story ramps itself up and writer, Matt Fitton, characterises him extremely well.

The story of technology running rampant is nothing new but it is still interesting to hear them in the world of Doctor Who, it is never too late to wonder, 'what if?', and this story is a great way of highlighting just how far ahead of time the 2008 series actually was. This particular script wouldn't fit with series one, two or three of the modern series but it feels at home, nestled with David Tennant and Catherine Tate's series 4, a year where mobile phone technology started to become more prominent and wildly available for human consumption.

Now we live in an era where technology has completely consumed our lives. So it is very fitting that this story is set in an era which started to highlight problems which have now occurred. From phones leaking sensitive information, computers being spied on in a matter of seconds through email viruses, electronic cigarettes blowing up in people's hands and video games being used as a way of stealing people's credit card information. We really do live in a golden age for technology, that could only have been dreamed of in 2005 and Technophobia uses the fear we still feel to create a tremendous adventure for one to indulge in...