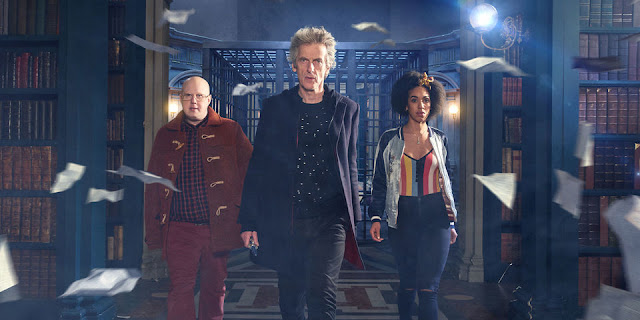 When it comes to looking back at Peter Capaldi's three years as the Twelfth Doctor, one thing is going to be apparent, showrunner, Stephen Moffat, likes to have narrative bending episode, one that tests every storytelling convention we know. We had Listen, in which we possibly saw a Time Lord having a mental breakdown, Heaven Sent, where the Doctor is literally the only character for the majority of the story's screen-time and now we have Extremis. Like Heaven Sent, in Extremis we get a Doctor who isn't quite the real Doctor, though this episode gives us a much more clearer explanation than just him being the latest in a long line of transporter duplicates. But more importantly, both episodes consider the Doctor at the point of death, he is forced to do what is right even when he knows it won't benefit him. But then virtue is only virtue in extremis, after all.

But to start this review we need to look at the end of the episode. Peter Capaldi is certainly going to be one of my favourite Doctor's and the reason why is never more evident than when he tells Bill that she and the rest of the world aren't real. Capaldi underplays the moment, making small choices to convey both his compassion and heartbreak. And this is what grounds such an impossible moment and it is in this regard that Capaldi brings the best out in Stephen Moffat. While Matt Smith and the Eleventh Doctor brought of the most of Stephen Moffat - Capaldi's performances have really brought out powerful moments, such as a few in Heaven Sent. The Doctor talks about ancient sects and myths and how computer really have trouble in understanding random numbers and the unexpected sentience of Mario and other computer game characters. It would be completely ridiculous if we weren't completely animated by the Doctor's pain at what he knows, by his simultaneous need to be truthful to Bill and the be as kind as he possibly can when he breaks the truth to her. 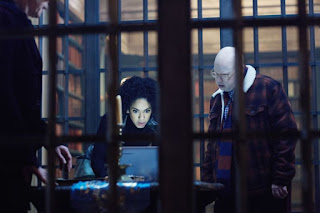 And it is important to note how much Bill grounds this episode in reality with its rather out-there premise. Sure, Extremis doesn't give her as much to do as other episodes have done so brilliantly but it is fair enough considering we only see the real Bill right at the end of the story. But the Bill we do spend the episode's screen-time with is damn accurate with even the silliest and comedic moments, like say the Pope interrupting her date with the nervous and guilt ridden Penny, a scene which shows some considerable restraint to the point where Penny isn't wearing a cross around her neck - are connected to a lived-in person. Bill's annoyance at the intruders and the Doctor for ruining her date are something we could have expected from seeing what she is like in her previous escapades. And it was also on display that she won't take orders from Nardole. Bill doesn't need to be overtly defined by her sexuality or because she is black or a woman but those traits can't help but inform her character and that can often mean she has to fight to be an equal.

Now, I'm not sure if it might be pushing it too far to say that that aspect also influences Bill's demand to know what is real and what isn't but I would be surprised if it wasn't an aspect of Pearl Mackie's acting choice in that particular scene. The larger point is that this world feels extremely real when viewed through Bill's eyes, which hasn't always been the case with previous companions like Clara or Amy. The sheer lack or artifice in Bill serves to make it all the more brutal when we discover that what we have been is nothing but artifice and that none of this is actually real. And that extends to the guest cast too with Corrado Invernizzi and Laurent Maurel impressing as the Cardinal Angelo and the CERN physicist, Nicolas, respectively. The former is a particularly good shout out, his mere presence signals a look at religion that Doctor Who rarely stares at. But faith is treated as beside the point - the visitors from the Vatican have it, the Doctor doesn't - move on - but beyond that one comment about the complexity of religion, the Doctor just excepts the situation on its own merits. Invernizzi's performance makes the one piece of exposition he has really interesting to watch, with his sincere offer of allowing the Doctor to confess all his sins working as a moment of which Extremis excels at, putting the Doctor in a position we have never seen him in before. 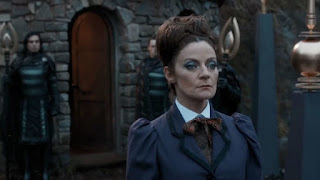 The extended flashback sequences we are offered are another unprecedented storytelling device hardly used in Doctor Who as it takes us right back to the events following on from The Husbands of River Song. After having engaged with a bit of misdirection concerning who is going to be executed, the episode gives us Missy. When I watched The Witches Familiar, it struck me how much the episode set both Missy and Davros up to be ongoing villains and Extremis serves as a payoff for that work, as the interactions between Peter Capaldi and Michelle Gomez really recall the emotionally complex friendship between the Third Doctor and Roger Delgado's Master. Missy doesn't need to convince the Doctor that they are friends but it is only at the moment where she is really facing death that the Doctor really believes she might be capable of doing good. While we shouldn't buy this for a second, the Doctor has always had a soft spot for the Master, whether he looked like Roger Delgado or John Simm.

And the Doctor saving the life of his friend is more about him than Missy. He does it because it is the right thing and a Doctor who doesn't do what is right isn't the Doctor. It was also a sweet touch that it was River Song - via Nardole, who she gave permission to kick the Doctor ass to - who reminds him, with the now blind Doctor clutching her diary just as he realises his imminent non-existence shouldn't stop him from being the Doctor and saving the day. It is that take away that binds past and present together here, though it is little more subtly than other episodes have done. It is also this point that makes Extremis less of a Moffat puzzle-box than other adventures, as this story is less about solving some hugely complicated space mystery and more about recognising what it is that makes the Doctor, the Doctor. And even then, it isn't as abstracted and self-referential as a lot of the Eleventh Doctor stories where. Instead it is about the Doctor being the Doctor and that even though he is about to die, he shouldn't forget to be the best version of himself.

Extremis is one of those episodes that offers more, the more you watch it and to more of an extent than Oxygen will. This episode is compelling enough to get lost in the mystery on the first watch, get caught up in the emotion and thematic work on the second and then dig into all the little details and numerous connections on the third. This is finally Stephen Moffat at his best and because of this, Peter Capaldi, Pearl Mackie, Matt Lucas and Michelle Gomez are also at their best. And like Listen and Heaven Sent, the result of this episode is something that you won't find on any other television episode and is certainly unlike anything else Doctor Who has done before. And the story is only just getting started but more on that next time...