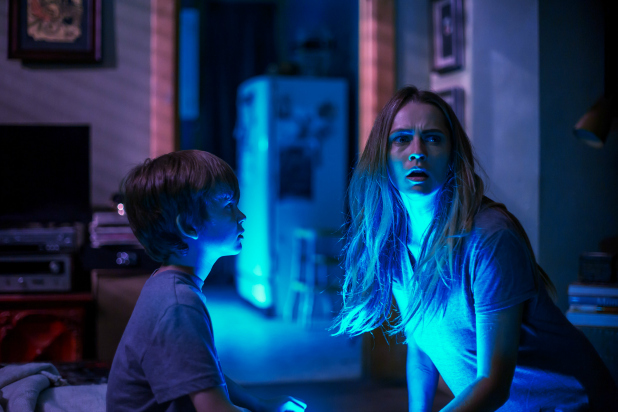 Sometimes a cigar is just a cigar, but one has to wonder, is a monster ever just a monster? Lights Out concerns a family being terrorised by nothing more than a fearsome metaphor, a willowy, whispering hag, who comes and goes with the flick of a light switch. This film goes somewhere where The Babadook went a few years ago, giving grief the shape of a bogeyman and sacrificing more than a few scares by being so obvious about it. Lights Out is even more obvious and even less careful about its subtext, which is so close to the surface you can see the graveyard soil being shovelled onto its coffin. The film is so blatantly about mental health that it makes it hard to both ignore and forgive what it ends up saying on the subject.

It is a pity because Lights Out would have worked brilliantly if it had focused on mankind's most primal phobia, the fear of the dark. This premise comes across right from the beginning in the opening scene, where some shmuck - working late a mannequin factory ultimately succumbs to an evil force that can only manifest itself in the dark. The surviving daughter Rebecca, played by Teresa Palmer, moves out of the family home not long after and into a flat above a tattoo parlor, covering her home's walls in Avenged Sevenfold posters and never letting her beau, Bret, played by Alexander DiPersia, sleep over. But she isn't really running from the ghost which has haunted her family. She is running from her mother, Sophie, played by Maria Bello, who exhibits all the symptoms of undiagnosed depression as well as a very obscure one - an ability to talk in whispers with a crooked shadow in her dimly lit home. The entity, who was a staple of her own past has now come back to scare the living hell out of Rebecca's young brother, Martin, played by Gabriel Bateman.

Disappearing when the lights are on and jerking to life like a horse at the races when the lights are off, Diana is a reasonably spooky creation. Even if her metaphoric function is painfully obvious from the get go. The film does go overboard when it comes to explaining her background, literally unpacking boxes of her pertinent backstory at one point and later, literally scrawling expository information on a wall. What was a good move was making mum the one with the 'imaginary friend', which was a interesting reversal on the usual horror movie and director, David F. Sandberg finds some brilliant ways of exploiting this gimmick. The cold opening to the movie makes for nerve wracking use of an overhead light on a timed motion sensor, while a later scene makes use of the blood red tattoo parlor's neon lights in Rebecca's flat.

But the simplest and probably the most effective of all the film's gimmicks is that of Diana blinking in and out of existence with the working of a light switch, something which comes from the film's source material, first uploaded onto YouTube in 2013. The two and a half minute format was probably the ideal length for an idea like this one because in expanding Sandberg's original movie into an hour and a half gives producer - James Wan (The Conjuring + Insidous), idea of a ghost-as-a-mental-disorder idea time to go horribly wrong. Sandberg conceives Sophie as a sullen mess of depressed tics - a despondent mother whose only character trait is that of despondency. Ultimately, this is a movie about depression, that treats those who are afflicted with it like nothing more than big burdens on their families, right the way through to its ending that carries the toxic implication of that idea to its logical conclusion. If you are going to make a movie about depression you need to be aware of the possible stances your movie may intentionally, or unintentionally take and sadly, Lights Out is one of those movies where the monster should have just been a monster...