Doctor Who: The Marian Conspiracy - Review 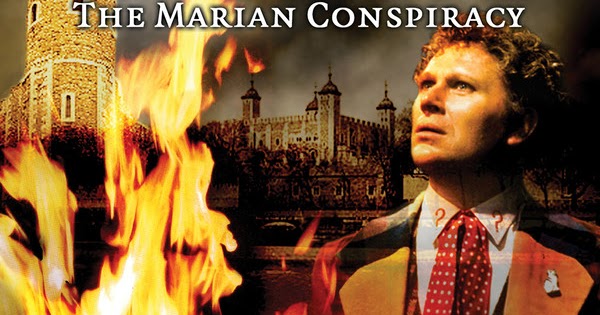 The Marian Conspiracy might only be the sixth release from their Doctor Who range at Big Finish, but it was a massive step forward. Not only is it the perfect jumping on point for new listeners but it also introduced us to a brand new companion, Evelyn Smythe, in the form of Maggie Stables, sadly no longer with us.

The story focuses around an inconvenient grandfather paradox where the Doctor is forced to seek an elderly history professor and take her back in time to find out why a temporal glitch is erasing her ancestry. Well, actually, the Doctor isn't planning to take her with him but Professor Smythe, whose specialty is Tudor England, isn't going to miss this kind of opportunity.

Quickly after their arrival, the pair soon find themselves caught up in the court politics and religious squabbles of Tudor England. Lets all turn to our history books now, this was a time when Catholics and Protestants were taking turns to be burnt at the stake. And if the Doctor and Evelyn aren't careful, they really do run the risk of being branded heretics and being burnt at the stake themselves...

The first thing you notice about this story is how much of a delight Evelyn is. She is a frumpy historian, all too ready to dispense some hot cocoa, intelligence, dry wit, sarcasm and plenty of motherly compassion with a stubbornness that matches the Doctor's. At the time, this was the second story that Colin Baker had done since he was axed from the show by Michael Grade. This story shows how truly brilliant Baker could have been and can be when he is given good material to work with. And this story allows us to hear the Sixth Doctor at his best, abrasive and slightly arrogant but with a strong ethical core.

The secondary characters in this story can vary in quality. But it is Mary Tudor who runs this story. I really liked Jeremy James/Jez Fielder who appears in many Big Finish audios as minor characters. But here he is really good as a young man who Evelyn takes under her wing as one of her 'students'.

For most of its run time, The Marian Conspiracy is a fairly light hearted story, but it isn't afraid to delve into the clashing and conflicting faiths of the time in a way that television Doctor Who wouldn't have done. And there is a memorable exchange, addressing the ethical ambiguities of the Doctor's actions. Colin Baker pulls the material off perfectly, decades before the Twelfth Doctor asked if he was a good man...