Doctor Who: The Leisure Hive - Review 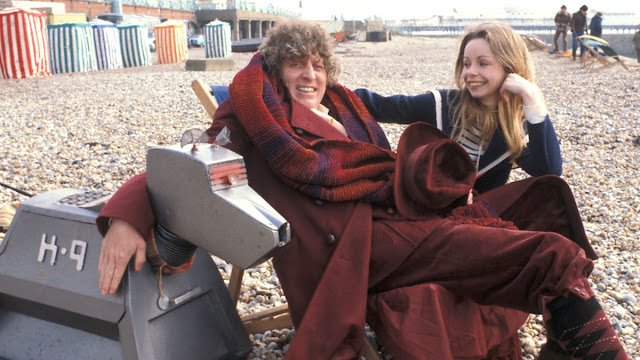 A new producer and script editor took over Doctor Who for series eighteen in 1980. Both John Nathan Turner and Christopher Hamilton Bidmead took a long, hard look at a show which had managed to become a distinctly embarrassing parody of itself and had decided to bring it into the new decade. It was unfortunate then that decade was 1980 and everything that had been fashionable in 1980 quickly looked outdated in 1981...

When season eighteen began to air in the August of 1980, the viewing audience must have been surprised, the show had undergone not just an overhaul, but it looked like a complete reboot of what had gone before. A new title sequence with a remix of the original theme tune brought the show screaming into the new decade. Now, I love the 1980s theme tune and effects but I don't really think it suits the Fourth Doctor. There were new special effects introduced and Tom Baker's iconic costume had been replaced by a horrific burgundy thing with awful question marks on his collar. But worse, the friendly relationship between The Doctor and his companion Romana was replaced with endless droning on concerning unintelligible technobabble. On the surface though, this was a stylish revamp, but it was ultimately hollow as it lacked anything resembling warmth and substance. 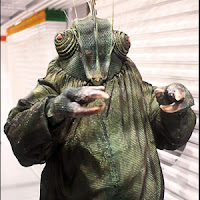 Sadly, The Leisure Hive would have still been dull even without the new look. There are just too many scenes with people sitting around talking about tachyons or corporate takeovers. And the story seems to have been plucked from a Scooby-Doo serial. There is an old amusement park, where there is something in disguise, in this case a group of aliens, is creeping around causing all manner of trouble, just so that they can take over the park. And I'm sure they would've gotten away with it too, if it hadn't been for those meddling Time-Lords.

We know there had been worse script-editors before this story but there is something about Christopher Bidmead that irritates me. I know this isn't how he wanted to be known but if were to write his full name whenever I mention him, then I'll be here till next Christmas. I'm sure that Bidmead is a nice enough person outside of his work, but judging from interviews, his twitter feed and the commentary tracks, he has an annoying assumption that his way is the best, or only, way to make Doctor Who. Or, it could have been because he created Adric. Or it might have been because he somehow managed to suck out the life and magic of the series and turned it into a very boring lecture on entropy. Which is ironic because the eventually ceased to be at the end of 1989. 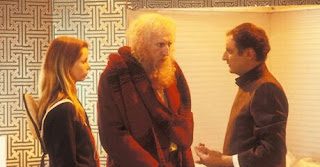 There is no denying that Bidmead took the show far too seriously. He wanted Doctor Who to be firmly placed in the realm of real science. That is fine, but not to the extent he wanted, this is Doctor Who not Star Trek, this is a show where an alien with a long scarf travels through the universe in a police box. So calling Doctor Who silly is already something of a redundant argument. Of course the show is silly. It has never tried to be anything but silly. It is silliness that is the most essential part of the show. And that is why people like me love it. And even though that silliness should be kept reigned in and on a tight leash, hard science, to the extent it is used here, has no place in the world of Doctor Who. It is nothing but boring and no one hates boring more than the Doctor.

And it wasn't just the fans who were upset by the sudden shift in tone that the series had taken on thanks to John Nathan Turner and Christopher Bidemead. By phasing out the humour in favour of increased scientific mumbo-jumbo, the pair also alienated the main cast. Lalla Ward had already decided leave as she was unhappy about the direction the series had taken under the eyes of Graham Williams and Douglas Adams. But she wasn't the only one.

From a mixture of illness and boredom, Tom Baker just couldn't be bothered to give the show his all anymore. He wanders through the majority of series eighteen, looking like he needs a good nap, waiting for the director to finally shout cut so he can rush off to the BBC bar for a quick drink. Baker really wasn't happy with the material he was being given under John Nathan Turner and Christopher Bidmead's gaze. This, provided with Nathan Turner's unwillingness to listen to suggestions and improvements, cemented his desire to leave the series. The Leisure Hive both on and off screen didn't get the new series off to a great start...