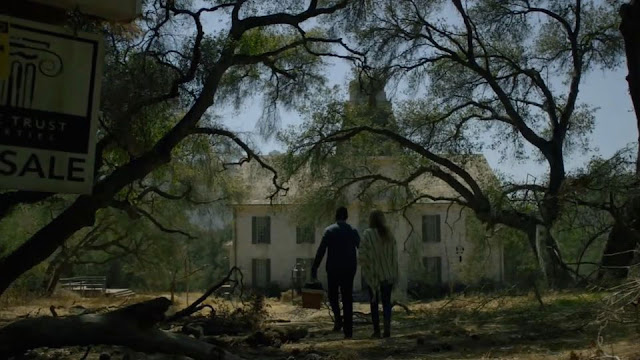 It isn't a lie to say that the true nature of the sixth season came to us under a particularly successful shroud of secrecy. There was a heap of intriguing teasers without any central theme, keeping us all guessing as to what the real thing would eventually be about. Where did it take place? When would it take place? And what kind of characters would we be getting this time?

Managing to keep the haunted house story secret, as well the reality TV re-enactment structure, was a brilliant idea. It really got people talking, creating a big buzz about a show now entering its sixth season. And the season was fun at first, watching the terror unfold onto actors playing the roles of the 'real people' who endured the original torment. And the show gave us the cheap thrill of watching the talented actors who have entered us in previous seasons of the show, inhabit new characters for this new season. But we also got to see some new faces with Cuba Gooding JR, Andre Holland and Adina Porter, making their first appearances.

Roanoke had a lot more than just a few tricks up its sleeve. Not only did the story change its format after four episodes, returning as 'My Roanoke Nightmare - Three Days In Hell', it transformed the remaining episodes into found footage, salvaged from an ill-fated sequel series. And the final episodes revealed the final days of Porter's character, Lee, through three different fake but satirical television shows. These breaks in the story allowed the season to take more than the few episodes a plotline like this should have really done.

Roanoke also began to tie together other elements from previous seasons. We knew it was a shared universe but this season took us to back to Murder House to see why the 'Croatoan' banishment spell didn't work on Zachary Quinto's character. It gave us a new house filled with many hateful ghouls that made the previous seasons seem like picnics. It also connected to Freak Show thanks to the character of Edward Mott and Coven, given that Lady Gaga's character was supposed to be the first Supreme. And Lana Winters, the main character from Asylum turned up at the end!

However, when Roanoke dragged, it really dragged. Matt and Shelby and then those who played them enter the house from hell, filled with so many creeps, it all felt like they were out of different horror movies. This may have been the point as Roanoke looked back on its past seasons. It was just unfortunate that the way it all would unravel worked against the tension it had built up in the opening episodes.

First we watched actors get assaulted by ghosts and cannibals, without investment from the audience because we knew they were only actors and it was a show within a show. But then when the original family and cast go back for the sequel series, they all for the same things we had seen in the opening episodes. The stakes were raised by nothing because nothing new was given to us. And then Matt and Shelby, the characters we need to emphasise with dissolve in madness and murder, leaving the audience with nothing to tether themselves to on the emotional front.

Fortunately it is around this time that we get more focus on Lee, the only survivor of the initial battles. Losing Matt and Shelby, the centre of the show obviously wasn't ideal but Porter was good as the deranged Lee. And luckily, by the time the finale came around, she was a powerful enough character for us to care about.

The season killed so many characters off in such a short space of time that in the final two episodes, new characters were brought in, who were just idiots and who were just brought in too be killed. Super fans of the original show and ghost hunters arrive, like the proverbial lambs to the slaughter who arrive just to be impaled or dismembered.

In the larger universe of the show, it will be interesting to see how the events of this finale ties into the wider world of the show. It was quite ridiculous that after the real deaths from the second show, people still thought it was all fake. Surely this type of coverage would expose the supernatural to the real world. However, it didn't. But maybe it was the implied attack at the end with the news coverage which holds the final key to entering a brand new era and style for the future of the series.

Roanoke managed to pique the interest of the viewers, whenever the story got upended but when things settled, we would be subjected to the same carnage over and over again. The show also appeared to work overtime in giving its characters reasons to stay in the house, having to return there again and again or not being able to escape the house. In the end, it began to feel like a never ending loop of the same stuff being played over and over again.