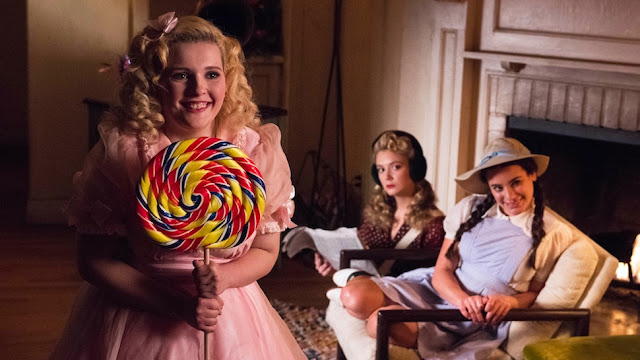 In many books, plays, television shows and films throughout history, romance has taken its victims to the grave. Romeo and Juliet, Wuthering Heights, The Great Gatsby and now, from the looks of it, Scream Queens!

I am glad that Dr. Brock has now been removed as a suspect, even if Munsch is still suspecting him of being a jealous boy toy in a Green Meanie costume, when a romantic evening with a former boyfriend is interrupted by a machete wielding monster. But we know that hearts are the only thing this doctor would use a knife on and right now, his love life is looking a little negative.

But one couldn't really blame Brock for looking right past Chanel, given that the pair of them are from different eras. He even imagines himself being in bed with Munsch. Chanel doesn't know what Blink-182, M.A.S.H., and Smash Mouth are. To her, these things belong on the oldies channel. Come on Chanel, even I know what half those things are!

And with the way that Chanel storms into her apartment demanding the other Chanel's help her to figure out a spacebrained way of removing Brock's Munsch cravings, one might think that they have forgotten that there is a serial killer on the loose. This includes Hester. Apparently, it is a much wiser idea to throw a 1940s style party for Brock for Chanel to prove she understands what he is talking about half the time. It makes one wonder just how easily people could forget there is a slimy monster lurking somewhere in the corridors of the hospital they all work in.

Despite Chanel changing from murder investigator to party planner, this doesn't stop Zayday from doing investigations on her own. She and Chamberlain set a trap in the hospital showers by running a bath with flower petals in the same water therapy tank a head was rolling around in not too long ago. But thanks to some toilet roll and candy stripper, they remove a piece of the monster's costume, giving them their first big clue. The skin of the costume could only come from one of the creepiest costume shops in the world. It really is the sort of place that might persuade John Wane Gacy to trade in his clown costume for a creepy Easter Bunny one. During those scenes in the costume shop, you could almost smell the dust as Zayday wandered through the shelves, all stocked with different types of terrifying costumes.

But things are never easy as the perpetrator paid only in cash and there was no receipt. And the shop owner has no idea what they look like since they only brought the costume through the post and the purchase dates and descriptions are enough to send Zayday running for the door.

The biggest lesson this episode gives us is that you have to be careful of widows. Zayday goes back to meet the woman whose husband was dumped in the swamp behind the hospital in the 1980s. Only for the widow to reveal her intentions and that she has drugged Zayday's tea. I should have realised that she was a lot more sinister than her flowery dresses let on.

I suppose that there is no way someone who comes into the house of a murderer and reveals they know everything would ever be escaping, police badge or no police badge. Zayday knows she is going to end up in some dungeon somewhere. A lesson for her would be when someone runs out of roffies, they are going to use Lorazepam.

And quickly, lets go back to the old boyfriend of Munsch's. If you have seen season 1 of Scream Queens, then you'll recognize him instantly. And the shocking revelation that he pulls will send you flying. Flying like Hester as just knocked you down a set of stairs, and he is feeling distinctly stabby...