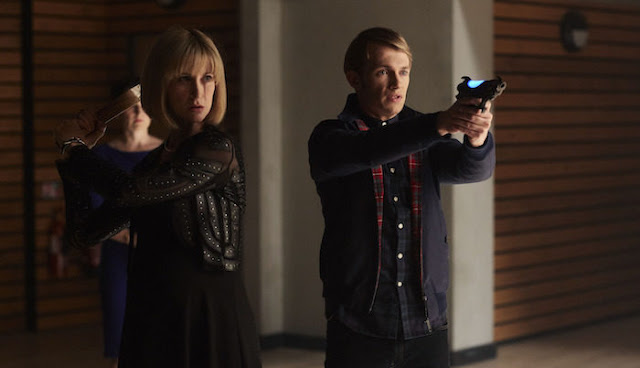 Did anyone know that April could sing? Well anyway, the pre-credits scene was the perfect way of providing an easy to digest catch-up and helps to remind us just how fractured this group has become following on from the events seen in Detained. They are avoiding each other, skipping classes that they are in with each other and keeping their distance from each other. It is only April and Charlie are speaking to each other.

It was no lie when it was said that given the disastrous ways the gang parted in Detained that it would only take seismic events to bring them all back together again. So then, enter Corakinus, the deposed king of the evil Shadow Kin, he wastes no time in killing Ram's father, Tanya's mother and attacking her brothers, threatening to kill Matteusz, all within the first fifteen minutes!

To make matters worse, Quill is now totally independent, thanks to the Arn having been removed from her head in the previous episode. The only thing standing between her and taking revenge on Charlie is the fact that she discovers she is heavily pregnant! The scenes when she discovers her pregnancy bumps are hilarious, actress Katherine Kelly brilliantly nailing each line and delivers the line that the Quill babies devour their mother in a way which is both amusing and deadly serious at the same time. But this is no ordinary Quill baby, it is a sole child instead of the litter that the Quill are used to as it was conceived in the Rhodian's Cabinet of Souls.

For me, Tanya, played by Vivian Operah, has been the weakest character of the lot. It is nothing to do with the actress, who makes the best out of what she is given, but for me, she never had enough to do and a lot of the action was given to the other members of the cast while Tanya did nothing but stand on the side-lines or moan about events at a later date. But I did like the scenes between Tanya and Quill in this episode. Quill is evidently ill-equipped to give emotional support to a human 14-year-old girl but she gives her combat training instead, allowing Tanya to vent her feelings through violence than sobbing in a kitchen.

And thanks to Charlie and Matteusz bringing in Coal Hill's head-teacher at gunpoint, we finally got to learn a lot more about the school's mysterious governors. And although they remain behind a locked door, Dorothea does reveal that they may have had something to do with the cracks which keep on appearing in the halls of Coal Hill.

The stage was finally set for the final showdown in the school hall, where else, between the Coal Hill gang and the Shadow Kin. And it seemed that all bets were off as Corakinus appeared and demanded to take April back to the realm of the Shadow Kin with him. What the silly king doesn't count on however is April's and Charlie's willingness for self-sacrifice which brings his reign of terror to an end in a genocidal event, thanks to the Cabinet of Souls, which was bound to happen at some point.

And while the ramifications from Charlie's and April's decisions will no doubt rumble into a possible second series, something which the show seriously deserves, hopefully with more than eight episodes, the episode also set up a couple of other plot threads to be picked up at some point.

The most important is that of who the Governors really are. We meet them right at the very end when they are all judging the head-teacher. Then each member of the Governor's turn their backs. What was it The Tenth Doctor said, "Don't turn your back..."

It was a surprise to see Cyril Nri, back in the Whoniverse having previously played The Shopkeeper in The Sarah Jane Adventures. While it isn't uncommon for Doctor Who to cast actors in the show more than once, just look at Colin Baker, the effects that surrounded Dorothea as she entered the Governor's realm looked an awful like those used when The Shopkeeper sent Sarah Jane, Rani and Clyde through time on missions for him. And given that The Shopkeeper was one of the characters that people had wanted to see return to either Doctor Who or The Sarah Jane Adventures, I wouldn't be surprised to see that it is The Shopkeeper at an earlier or later point in his life. But his appearance spelt doom for Dorothea who had her neck snapped by none other than, a frigging Weeping Angel!

Now, The Weeping Angel's had their day in Doctor Who, their appearances after Blink and Time of Angels, were never surpassed. But they are eternally popular, hell, their first appearance really terrified me when I was younger. Ironically though, the day for these monsters are now behind them.

But maybe an appearance in Class is going to be just what they need, especially since they seem less concerned about sending people back in time and just snapping their necks instead, maybe these monsters are going to be scary again?

Despite an appearance from Peter Capaldi as the Twelfth Doctor and lots of references to previous Doctor Who adventures, Class has wonderfully beaten its own path in the Whoniverse. And I have every faith in creator, Patrick Ness bringing new life to the Weeping Angels and Coal Hill should the show get a second series. And judging from how strong this series actually was, if it doesn't, it will be a crime...