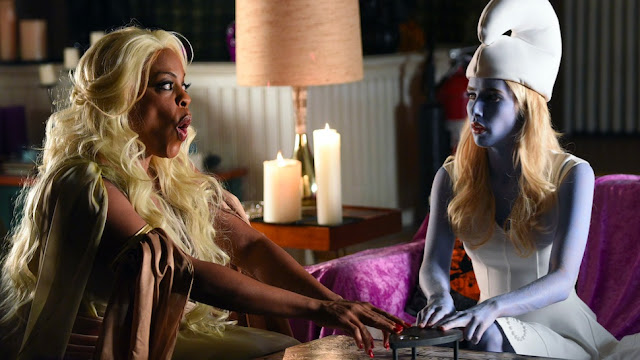 Well, Halloween Blues had so many ear-piercing screams that one needs to invest in a hearing aid now, given that we might have gone deaf or at least a cheap set of headphones!

So Chad Radwell is dead. I for one, wasn't shocked, I never really liked the character, his character felt too much like a waste of space parading around in a pair of far-too-tight chinos. Chanel's reaction is better, blasphemously mourning her nearly husband in a bright pink suit that mirrors that of Jackie Kennedy. And Denise feels that the best thing she can do is go around wearing the bridal gown of her rival to Chad's affections! This episode has the feeling that a green monster is roaming the hospital halls is nothing more than a minor inconvenience.

And is it just me or is Dean Munsch getting creepier? The casual way she bats away the accusation of medical malpractice is a little worrying. And then there is the sinister smile she forms when she finds out that Chad's fortune is being left to the CURE institute. Or should we be worried with the way she coolly disproves the theory that the killer is really the baby who would have born to the pregnant woman whose husband was dumped into the swamp on the night of the Halloween party in 1986. One wonders what she must have been taking just before the wedding that made her stay so eerily calm.

And it appears that the Chanel's tradition of Chanel-o-ween has gotten even more bizarre now that the queen of the Chanel's has got access to a morgue. During a pseudo reality show clip that would make even the Kardasians cringe, she tells her internet followers that they are real, shining examples of why euthanasia should be made legal as she drops of boxes of biohazard waste on their doorsteps. After all, why send out rubber hands when she can get real ones just as easily? If she makes it till Christmas, I dread to think what vile plan she will dream up for that holiday!

My suspicions have once again fallen on Doctor Brock. We know where his transplanted hand came from, but why does he give Chanel such a high dose of colloidal silver that she wakes up the next morning completely blue? But even if he does turn out to have an unbreakable alibi, there is really nothing that can excuse him from his affair with Musch, while Chad was being killed in some back alley just before his wedding.

And last year's killer is allowed out to the Halloween party too, even though Hester is given a Jason costume and an ankle bracelet, she quickly changes it for something a little more, politically incorrect. This act results in Chanel #5 getting accused of murder for the hundredth time. Hester is clearly psychotic but does she have some sort of connection with the swamp creature? And there is still no sign of Nurse Awful which puts her up there on the suspect list, is she still popping pills or is she dressing up as a green monster and murdering people for some reason which hasn't yet been said? I guess only time will tell...