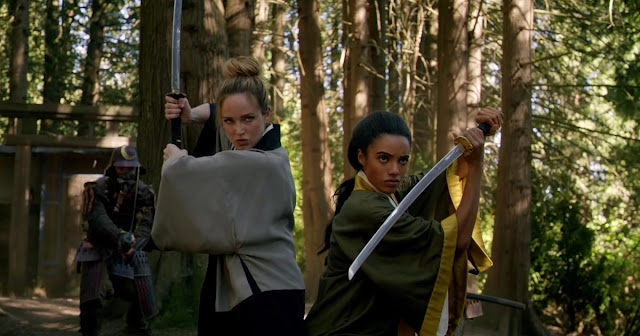 Since the second season has begun, Legends of Tomorrow has really hit the ground running, in fact just the first two episodes along provide a strong argument that Legends has the potential to be the best DC show that The CW has on offer. But unfortunately, that claim might be a little premature from this episode. While Shogun was an enjoyable instalment to the series, it didn't do much in the way of continuing the momentum set up in the previous episodes.

The last season saw the Legends travel to the Wild West in a parody of the Western film, The Magnificent Seven. Shogun does the same, mirroring with the movie, The Seven Samurai. We see the Legends adjusting to their lives in Feudal Japan and the episode culminates in them defending the village they have arrived in from an attack by a ruthless samurai.

It is a shame that by the time the episode reaches its conclusion, the similarities to the wild-west episode are a little too much to ignore. For me there was a 'been there, done that' quality to it and while the setting might have been something we hadn't seen before, the plot wasn't. The writers should have chosen a different movie to make a tribute to. How about The Hidden Fortress? Lets make the Legends go on the offensive. And with the movie delivering an amusing little Star Wars reference, why not focus on the movie that heavily inspired Star Wars?

But the plot did allow for us to witness some solid character arcs for Ray, Nate and Amaya, the newest member of the Legends. The opening sequence was great for Amaya, re-introducing her to the audience as she stalked the corridors of the Wave Rider and defeated the Legends one by one. She is a worthy addition to the lineup. And in the group dynamic she is a solid fit. Her character has great comedic chemistry with the grumpy Mick and this is enough for me to justify her place on the time. And since Snart's death, it is nice to see someone for Mick to play off.

The journeys for Nate and Ray were separate but related as they are the ones who find themselves stranded in 16th century Japan. The episode didn't rival the likes of Star City in 2046 when it came to an elaborate, fully fledged setting. But the character arcs made up for this. Nate is forced to struggle with the euphoria of becoming a superhero and the struggle to try and master his new powers. His character is slowly becoming more interesting as more is revealed about his rough childhood as a physically frail boy who used history as his gateway to adventures he could never experience. I like heroes who like being heroes rather than ones who constantly wallow in misery. This is something that Arrow wants to try one day!

Nate finally uses his Citizen Steel powers for the first time. While the special effects aren't mind-blowing, they get the job done. For me, I found it more weird that Nate is going to refer to himself as 'Steel'. This may change in the massive crossover episode as Supergirl is bringing a hero called Steel, so this might get confusing otherwise!

As Nate learned to harness his abilities, Ray had to be reminded that his heroism is innate and he shouldn't be dependant on a multi-billion dollar suit of armour. There was something interesting in the idea that Ray orchestrated the end of his costumed career as he helped Nate to embrace his own. Not to mention that the sight of the Atom suit, mixed with a traditional samurai costume looked pretty cool.  But Shogun wasn't a particularly memorable villain, at he had the suit going for him.

Masako and Ichiro weren't memorable either. And there wasn't a great deal of chemistry between Melanchon and Nick Zano, I was glad that the doomed relationship never took off. But what I did like was the revelation that Masako and Ichiro are distant ancestors of Tatsu Yamashiro, a woman who would become Katana in the third season of Arrow! I always find it neat to see these connections form.

And it will be interesting to see how Ray tries to move on from the loss of his armour. He will probably be out of commission for a week or two but I sure by the time that the Invasion crossover comes around, it'll be back. And I wouldn't mind seeing something a little more reminiscent of the comic book costume either. Brandon Routh would probably appreciate a less cumbersome suit too!

Firestorm also good a good but brief subplot in this episode as the pair found a hidden compartment which belonged to Rip Hunter. There was a voice recording from Barry Allen, who obviously goes through a second puberty in the next forty years. We don't know what Barry reveals in this message but it will no doubt play a part in the overriding story-arc for the rest of the season.

The final problem with Shogun was that it did nothing to establish a status quo for the team. None of the Legends were bothered by Rex Tyler's murder or wanted to hunt down his killer. Sara seems content to wander the timestream and wait for challenges to present themselves. I hope the season maintains its focus as much as possible as the story plays out.

Shogun was a perfectly enjoyable look in Feudal Japan and there were some strong story arcs for Nate and Ray. But there was real sense that he had seen this storyline before. And somewhere, the plot had lost its impetus that it had had in the previous two opening episodes...