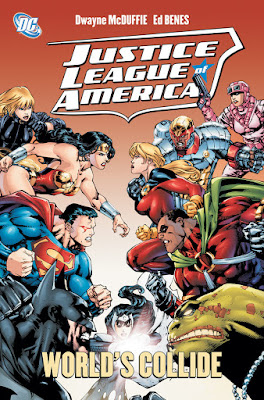 When coming to DC Comics, I don't usually know where to start, having always been more of a Marvel fan. But whichever graphic novel I pick up, usually from my library, I find myself enjoying it, even if I don't fully understand what is going on because I have no idea what went on earlier. However I do understand that after his event, Final Crisis, author Dwayne McDuffie's work on Justice League of America got considerably better. Something that even I picked up on reading this story was that his focus was usually on the characters because sometimes the plot itself could be a little flat.

Following on from Final Crisis, came another Justice League volume, Second Coming and then When Worlds Collide, which would prove to be his final story in the world of the Justice League of America.

As I said above, the strength of McDuffie's run doesn't come so much from the plot but the characters involved in the story. For me, never more is that proved than here. I enjoyed the sadly doomed from the start, romance between Red Arrow and Hawkgirl. In this volume McDuffie really makes Doctor Light and the new, younger Firestorm, shine, Light being over angry and with Firestorm being over flippant. But both these Justice League outsiders shine and have some good moments together, mainly because Firestorm fancies Doctor Light.

In the wake of Final Crisis, McDuffie is left with a number of smaller heroes to play with given Batman's apparent death, Hal Jordan's Green Lantern taking Green Arrow and making his own team, Superman travelling to another planet and Wonder Woman just not wanting to play ball. But that actually helps the story as we get to see a new team put together including Zatanna, Vixen, Firestorm, John Stewart (another Green Lantern) and Doctor Light. Here McDuffie gets points again as it is his characterisation that builds this team up and he shows us how this new team can take down a powerful Justice League villain like Starbreaker convincingly. The new team quickly learn to like each other and care for one another and it makes them all the more endearing. There is a real soul to this story that hadn't been there in the opening issues of the book and it really makes the reader care because suddenly, the author cared too.

The only character to get an awful treatment in this book is Black Canary, who was the newly elected leader of the League. This is because the other members of the League don't really take her seriously despite her having been a member for more years than I can remember. She finds out that Batman, Wonder Woman and Superman have been secretly 'leading' the team behind her back and then that Green Lantern and her own husband, Green Arrow, are planning to form a team of their own. She is so disillusioned that she quits the team herself.

For people who were excited to see Black Canary take charge after seeing her in a powerful position as one of the original members of the Birds of Prey, then this book would be disappointing. For years, writers cast Canary as a victim and by chairing the League, it not only was a victory for Canary but women finally got portrayed properly within comics. But I suppose there is a difficulty when characters reach their full potential in comics, there is nowhere else for them to go and we have to break them down again to build them up once more. The same thing happened with Oracle in Birds of Prey and there is a scene in this book between Canary and Oracle where they discuss the fact that it is sexism which is hindering Canary's leadership of the team. But this leads one to wonder if it is McDuffie making another statement on his sometimes, troubled, run on the Justice League.

I think we need to really research the problems behind the scenes at DC Comics to fully understand what happened not only with Canary but McDuffie's entire run on the series. We get another scene between Canary and Hal Jordan's Green Lantern where Lantern ticks off on one hand what the League had actually done since Canary had taken over. I don't think this is another instance of sexism but more McDuffie making another stab at the problems behind the scenes. Apart from assisting in the big events and some mini-series, the League hadn't really been allowed to anything. And compared to the work the JLA were doing in Grant Morrison's book, the work these guys did in this book was indeed paltry.

Following the publication of the final issue collected in this book (#34), McDuffie was fired from DC Comics, supposedly because he had been airing his concerns with the direction his book was being forced to take. And, according to DC Comics, he had interfered numerous times with the major Comic Book events. And I'm sure that no comic is easy to write but is writing for a title like Justice League as hard as it appears or is because you have to conform to what the big bosses at DC Comics wanted? And could the title, When Worlds Collide, have a double meaning? Could it have been a metaphor for the worlds of Dwayne McDuffie and DC Comics, colliding?